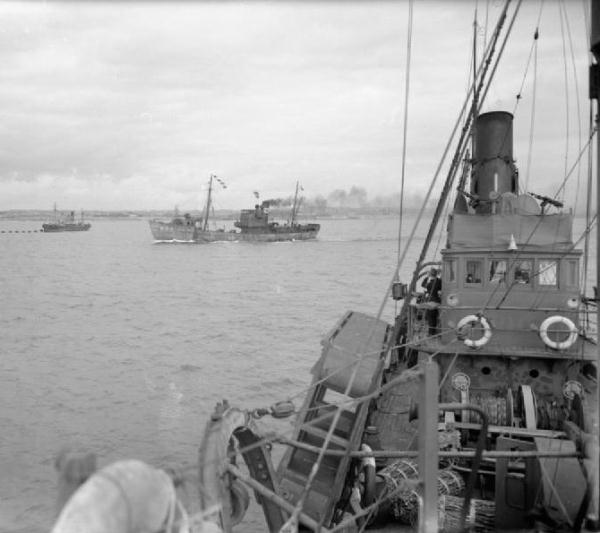 On 2 May the convoy was joined by the battleship HMS Royal Sovereign (Capt. H.B. Jacomb, RN). She detached from the convoy on 9 May.

On 18 May the destroyer HMS Roxborough (Lt. V.A. Wight-Boycott, OBE, RN) joined the convoy. Also on this day HMS Leamington and HMS Anemone were detached.

On 19 May the destroyer Saladin joined the escort.

The convoy arrived at Liverpool on 20 May.

Of the whalers Sulla later had to turn back.Shusa and Stefa were able to join the convoy while Svega made the passage to Murmansk independently with Shera until that ship sank on 9 March, presumably as a result of stability problems as she suddenly capsized. The Svega was able to pick up three survivors from the freezing water.

HMS Offa and HMS Oribi joined the convoy early on the 5th 100 miles south of Jan Mayen Island while HMS Gossamer could not find the convoy and proceeded to Murmansk independently.

The light cruiser HMS Kenya (Capt. M.M. Denny, RN) also joined on the 5th. She had departed Hvalfiord with the cover force at 0600/3. She parted company again on the 6th. She was however ordered to rejoin the convoy and she did so in the evening of the 6th.

The same evening the escorts were informed that a German heavy ship, thought to be the Tirpitz had left Trondheim and was proceeding northwards. The same evening the convoy encountered ice and course had to be changed from north-east to south-east. One of the merchant ships, the Bateau and the whaler Sulla had to turn back. The destroyer HMS Oribi sustained ice damage.

Around 1400/7, HMS Kenya sighted smoke on the horizon to the northward so she set off to investigate. Visibility was now at the maximum. It soon became apparent that it was a staggler from convoy QP 8 so Kenya then rejoined convoy PQ 12 at 1515/7.

Then around 1600/7 HMS Kenya received Admiralty signal 1519A/7 stating that enemy surface forces might be nearby. The convoy was ordered to steer north so at 1640/7 course was altered to 360°. Shortly afterwards a signal timed 1632/7 was received from the Russian merchant vessel Izhora, a staggler from convoy QP 8, that she was being gunned by an enemy warship in position 72°35'N, 10°50'E although the position was doubtful and the signal was garbled. It was thought this was the merchant vessel we sighted a few hours earlier. This ship was now thought to be 35 to 40 miles to the eastward of convoy PQ 12 and its northerly course might drive the convoy straight into the arms of the enemy.

Capt. Denny then decided to change course to 60°. Kenya's Walrus aircraft was launched at 1720/7 to search between 270° and 210°. The Walrus returned soon after 1800/7 having sighted nothing after searching to a depth of 45 miles. Course was therefore altered to 040° to bring the convoy closer to its original track.

No more news was heard from the Izhora or the enemy but soon after midnight another signal from the Admiralty was received telling the convoy to steer north of Bear Island, if ice permitted, a very considerable diversion from the original route. At daylight therefore the convoy altered further to the northward. Capt. Denny warning the convoy Commodore not to take the destroyers through the ice. The weather and information about the icefield, soon determined Capt. Denny and the convoy Commodore to disregard the Admiralty signal and they altered course to the south-east a little after mid-day, intending to cross the miridian of Bear Island to the southward after dark that evening. About 1530/8, between snowstorms, they sighted the island 40 miles off to the north-east, and the icefield at the same time. At dusk, 1700/8, they ran into the fringe of the ice.

it took the convoy three hours to work clear and reform, whereupon, to avoid further damage to HMS Oribi, Captain Denny detached her to make her own way to Murmansk, which she reached on March 10th.

The convoy went on, keeping as far north as the ice allowed. On the 9th, HMS Offa detected a patrolling aircraft by her radar, but thick and persistent sea smoke rising many feet into the air, combined with a change of course for two hours, prevented discovery, while intercepted signals showed that the Tirpitz was no longer likely to be a threat, for which she had been attacked off the Lofoten Islands by aircraft from HMS Victorious.

The two Soviet destroyers, HMS Harrier and HMS Sharpshooter parted company with the convoy on 3 March. The other escorts remained with the convoy until it arrived in Iceland.

Close cover for the convoy was provided from 3 to 7 March by the light cruiser HMS Nigeria (Capt. J.G.L. Dundas, CBE, RN) which had departed the Kola Inlet on 2 March and arrived at Scapa Flow on 8 March.

On 4 March the convoy scattered due to the bad weather conditions but was later reformed. On 9 March the convoy was disbanded after wich most ships arrived in Icelandic ports on 11 March 1942 minus a staggler from the convoy, the Soviet Izhora, which had been found and sunk around 1630/7 by the German destroyer Z 14 / Friedrich Ihn.

At 0700/4, the destoyers HMS Faulknor and HMS Eskimo were detached from the Renown group to refuel at Seidisfjord.

At 1600/4, HMS Berwick was detached from the King George V'-group to return to Scapa escorted by HMS Bedouin. She had developed engine trouble. The cruiser HMS Sheffield (Capt. A.W. Clarke, RN) was ordered to take over her place after refuelling at Seidisfjord.

At 2300/4, HMS Kenya was detached from the Renown group to provide close cover for convoy PQ 12. Around the same time HMS Bedouin was ordered to part company with HMS Berwick and go to the aid of HMS Sheffield which had been mined near the Seidisfjord. HMS Faulknor and HMS Eskimo were also ordered to assist the damaged cruiser.

At the same time the 'King George V'-group was about 100 miles bearing 154° from the 'Renown'-group and was also steering a northerly course.

At 2000/5, the 'Renown'-group altered course easterly to affect a rendezvous with the 'King George V'-group the next morning. Admiral Tovey had decided to concentrate his forces.

In a signal timed 1801/6 the submarine HMS Seawolf (Lt. R.P. Raikes, RN) reported sighting the Tirpitz off Kya. At 0010/7, Admiral Tovey received the news of Seawolf's sighting. Tovey now knew that Tirpitz was out but he was unsure if the German battleships was out to attack the convoy or to break out into the Atlantic. It had been intended to fly off search aircraft from HMS Victorious but the weather conditions prevented any flying from taking place.

At 1750/7, the Home Fleet altered course to the east and the destroyers HMS Icarus and HMS Intrepid detached to refuel in Iceland.

At 2000/7, the Home Fleet altered course to the north. At the same time the destroyers HMS Onslow, HMS Ashanti, HMS Punjabi, HMS Fury, HMS Echo and HMS Eclipse were detached to sweep north between the Home Fleet and the Lofoten Islands along what Admiral Tovey thought to be the enemy’s most likely route to return to Trondheim. After this sweep the destroyers were to proceed to Seidisfjord to refuel. Apparently only HMS Lookout remained with the Fleet.

At 2400/7, the Home Fleet altered course to the south so that the Fleet could be in position off the Lofoten Islands to launch a strike force at dawn in case the Tirpitz would be sighted by the destroyers. At 0400/8 Admiral Tovey concluded that he had missed the German battleships and since he was without destroyers except for HMS Lookout and in submarine infected waters, he turned south-west towards Iceland to collect some destroyers that had already refuelled.

At 1820/8 the Home Fleet altered course to the north-east despite that no destroyer had joined so far. Admiral Tovey then broke radio silence sending a signal to the Admiralty requesting destroyers to be sent out and refuelling facilities at sea for his destroyers. The heavy cruiser HMS London (Capt. R.M. Servaes, CBE, RN, flying the flag of Rear-Admiral L.H.K. Hamilton, DSO and Bar, RN) departed from Iceland with orders to rendezvous with the heavy cruiser HMS Kent (Capt. A.E.M.B. Cunninghame-Graham, RN) coming from the Denmark patrol and the light cruisers HMS Liverpool (Capt. W.R. Slayter, DSC, RN) and HMS Trinidad (Capt. L.S. Saunders, RN) departed Scapa Flow on 7 March. These cruisers were ordered to refuel destroyers at sea.

The heavy cruisers apparently did not fuel any destroyers. The light cruisers fuelled HMS Punjabi and HMS Fury on the 9th. HMS Echo was unable to fuel from them due to the bad weather conditions. She went to Seidisfjord to fuel as did HMS Onslow HMS Ashanti and HMS Eclipse.

Around 2000/8 the Tirpitz, having been unable to find the convoy, set course to return to Trondheim.

At 0240/9, the Admiralty informed Admiral Tovey that the Tirpitz was heading south so the Home Fleet altered course to the south-east to close the Lofoten Islands.

At 0640/9, Admiral Tovey ordered HMS Victorious to fly off a reconnaissance force of 6 Albacores on a diverging search between 105° and 155° to a depth of 150 miles to search for the German battleship.

At 0730/9, a strike force of 12 torpedo-carrying Albacores were flown off.

At 0802/9, one of the reconnaissance aircraft the Tirpitz and a destroyer (Z 14 / Friedrich Ihn) sailing south and made a report. Shortly after being sighted the Germans however altered course towards the Vestfjord and Narvik.

At 0917/9, the Tirpitz was attacked by the strike force. No hits were obtained though one torpedo only missed the battleships stern by 30 feet. Two of the attacking Albacores were shot down by AA fire.

At 1545/9, the Home Fleet was attacked by 3 Ju-88 bombers, one bomb landed close astern of HMS Victorious but no damaged was caused.

Around 1200/10 the destroyers HMS Intrepid and HMS Icarus joined.