Fleet tug of the Navajo class 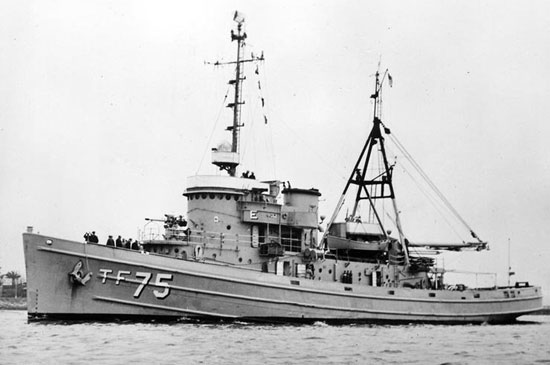 We don't have any commands listed for USS Sioux (AT 75)

At 1300L/18, USS Jenkins was detached to perform escort duties.

At 1115L/20, orders were received from the Commander 3rd Fleet directing Task Force 74 to proceed to Esperitu Santo via Bougainville Strait so as to arrive at daybreak the next morning. Course was then set to 105°, speed 23 knots. The Force was zig-zagging.

At 1846L/20, in position 15°07'S, 163°34'E, HMAS Hobart was struck on the port side aft by a torpedo fired by a submarine. [This was the Japanese I-11 (offsite link).] At this time HMAS Australia and HMAS Hobart were formed in column 600 yards apart and were screened by USS Nicholas, USS Radford and USS O'Bannon. Base course was 105°, speed 23 knots and British zig-zag no.38 was being carried out. The night was clear and dark (starlit) and the moon had not yet risen. Sea slight.

in accordance with the zig-zag plan, course had been altered to 115° (10° right of base course) at 1835L/20 and at 1845L/20 course was altered to 135° (30° right of base course). HMAS Australia had just made or were making this latter alteration of course of course but, by HMAS Hobart's clock the wheel would have been put over in another 20 seconds.

On being struck HMAS Hobart immediately reported ' Jig Emerg '. This was by night the emergency turn procedure. So the remainder of the force was manoeuvred clear to starboard. The destroyers USS Nicholas and USS Radford were ordered to stand by HMAS Hobart while HMAS Australia screened by USS O'Bannon continued on. By TBS Rear-Admiral Crutchley informed T/Capt. McInerney that he would make the initial report (signal) of the happening and that he was to make subsequent reports in order to keep all authorities advised of Hobart's condition and off progress being made in getting her clear of the area.

The initial report of Rear-Admiral Crutchley was passed only after considerable communication difficulty for, in spite of the urgent priority given in the transmission, no station answered immediately except Thursday Island (which answered within two minutes). There was much traffic between ships and shore stations on both Task Force Commander's frequency and ship-shore wave. Radio Noumea eventually accepted the message after considerable delay.

After clearing to the southward, HMAS Australia and USS O'Bannon shaped course for Bougainville Strait and re-commenced zig-zag.

On receipt of the report of the casualty to HMAS Hobart, the Commander 3rd Fleet immmediately despatched tugs and additional escorts and also ordered COMPATWING 1 to provide A/S cover from dawn on 21 July until HMAS Hobart and escorts reached Esperitu Santo.

HMAS Australia and USS O'Bannon arrived at Esperitu Santo around 0700L/21. Shortly afterwards USS Jenkins arrived having completed her escort duties. All three then immediately completed with fuel and stores.

Shortly afterwards USS O'Bannon was ordered to proceed on escort duties. HMAS Australia and USS Jenkins were kept at one hour notice for sea.

During the day, reports from COMDESRON 21 in USS Nicholas with HMAS Hobart and escorts showed that the damaged ship was making good progress towards Espiritu Santo and would arrive after dark.

At 1700K/21, USS Sioux secured to HMAS Hobart forwards and took her in tow.

At 1725K/21, USS Vireo secured alongside on the starboard side. She casted off after 15 minutes.

At 0145L/22, HMAS Hobart safely reached Segond Channel and she dropped anchor around 0230K/22. USS Nicholas and USS Radford were ordered to hasten completion of logistic requirements and Rear-Admiral Crutchley reported to the Commander 3rd Fleet that HMAS Australia, USS Nicholas, USS Radford and USS Jenkins would be ready on two hour's notice from 1600K/22.

Damage to HMAS Hobart was severe. She was taken in hand at Esperitu Santo for temporary repairs before she was able to proceed to Sydney for permanent repairs. (1)