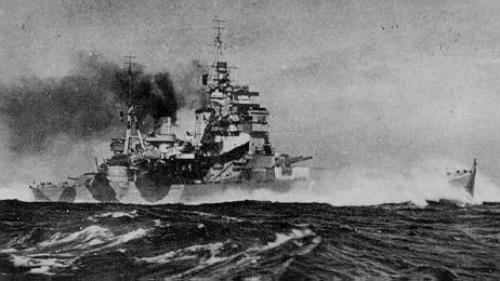 At the beginning of WWII the battleship was seen as the height of sea power and having the most powerful and fastest battleships was considered all important. This was the so-called big gun thinking dating from World War One.

Around the time of World War One a new subclass of Battleships arrived; fast battleships. These were very fast and also very powerful, example being the famous German Biscmarck class. In 1938 USA, Britain and France invoked an escalator clause in the Second London Treaty to build battleships up to 45,000 tons. At the time the nations had already committed to build ships of around 35,000 tons, resulting in the US North Carolina (2) and South Dakota (4) ships, the 4 British King George V and French Richeleau ships. The US Navy also completed 4 of planned 6 Iowa class battleships, while the British aborted their Lion class ships. During WWII Battleships were used to control sea lines and in shore bombardments, especially in the Pacific.

Aircraft carriers, both during the British attack on Taranto in Nov 1940 and of course Pearl Harbor in Dec 1941, proved to be the future of naval warfare, along with submarines. A fleet of battleships really could not hope to defeat a carrier force during WWII. Today no Battleships remain in active service with any navy, US Navy’s Iowa class being the last to be decommissioned.

All Battleship classes (in service with the Royal Navy).