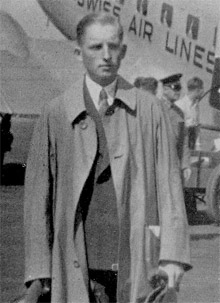 Fifteen minutes later, a U-boat surfaced 2400 yards from the Q-ship, and soon opened fire. The U-boat quickly found the range, scoring five hits, which severely damaged the Privet, killing two of her crew, and leaving her dead in the water. At 3:25pm, the Privet dropped the scantling hiding her 12-pounder (75mm) guns, and got off nine salvos at 2,000 yards before the submarine disappeared below the waves, with the Q-ship claiming four hits.

Privet’s logs do not include a detailed description of the submarine it engaged. The attribution that U 85, under Kplt. Willy Petz, was the submarine involved and that it was sunk in the action comes from the Royal Navy, based upon its wartime understanding of U-boat operations. A closer examination of U-boat records establishes that this attribution is incorrect, that the submarine that Privet exchanged gunfire with could not have been U 85, but rather must have been UC 68, which was not sunk in this action.

In general, the U-boats that patrolled in the English Channel during World War I were UB and UC type boats based in occupied Flanders operating through the Straits of Dover. The larger U-series diesel torpedo-attack boats were based out of Germany, and only rarely ventured through Dover. Rather they typically went around the north of Scotland to reach the Atlantic.

There were a few short exceptions to this, one of which occurred in early 1917. Unrestricted submarine warfare resumed on February 1, 1917. U-series boats operating off the south coast of Ireland and in the Bay of Biscay went through Dover to take full advantage of this opportunity.

Various locations related to the loss of U 85 and UC 68.

Ships hit by mines from UC 68.

On February 1, 1917, U 85 sailed from Helgoland on her second patrol overall and first beyond the North Sea. This patrol lasted 16 days. The big U-boat went through Dover outbound, operated off the south coast of Ireland, and then returned home via the "Nordweg", that is reentering the North Sea by sailing around the north of the Shetland Islands. U 85 torpedoed four ships while on station off the Irish coast, sinking three, and damaging the other.

In the experience (Erfahrungen) section of U 85’s KTB, Petz argued strongly against going through Dover:

(Transl.) The advantage that transiting through the Channel was to achieve, time savings, has been only partially realized. As a result of frequent submerged operations, the voyage Helgoland-Channel-Fastnet takes 4.75 days, the return voyage Fastnet-Shetlands-Helgoland 6.05 days.

The saving of 1.3 days is in my opinion not worth the large disadvantages of the Channel passage.

The advantage of saving time falls away completely if the boat is not able to get through the Straits on the first night but instead must wait another day. Conditions will become ever more unfavorable with the longer days. Countermeasures will presumably become even larger.

U 85 sailed again from Emden on March 6, 1917, a week before the Privet engagement. Joining her was her sistership and flotillamate U 81 under Kplt. Raimund Weisbach. Both boats intended to sail through Dover to get to their patrol stations but hit extremely heavy weather soon after sailing.

U 81’s KTB describes conditions early on March 7th as Sea State 8, with the barometer falling further. The boat was forced to dive for a time as she was taking in too much water her conning tower hatch. Later in the day, U 81 began taking water through a leak in the conning tower that limited how deep the submarine could dive. She was also leaking oil from a tank on her starboard side. Weisbach turned north, abandoning going through Dover and instead took the Nordweg to give the crew time to make repairs.

(Transl.) With reserve bunkers filled [with diesel fuel] boats of the U81/U86 series are so deep in the water and are so cumbersome that their otherwise excellent properties suffer considerably. This must be taken into account, as the action radius is otherwise too small.

On March 28, a day after returning to Emden from a three-week patrol, Weisbach submitted his comments on his patrol. He began by writing about U 85, about which concern was growing.

(Transl.) From the message from U 85, that the boat had a strong oil leak, and the indication of U 81, that U 85 had taken off Terschelling a northern course, it can be seen that U 85 has taken the Nordweg. This would correspond to the instructions of the flotilla. However, the boat should have then radioed. So far, no message from the boat has been received. However, it can be assumed that the mast antennas or the masts themselves were rendered unusable by the bad weather. (Emphesis added).

Of course, U 85’s decision to turn north, the extremely heavy weather and the lack of subsequent contact suggests another possibility: that U 85 simply foundered.

UC 68, under Oblt.z.S Hans Degetau, arrived in Flanders on February 16, 1917. UC 68 sailed at 5:45pm (German time) on March 10, 1917 from Zeebrugge to operate in the English Channel. Her orders were to lay mines off Dartmouth and Plymouth, and then attack shipping on the English side of the Channel between Start Point and the Scillys. UC 68 was to return to base after no more than 10 days.

There are three other events that are linked in conventional accounts to U 85 while in the Channel. On March 11th, at 4:45am British time, the Q-ship Bayard, a converted lugger, described being engaged almost simultaneously by two U-boats off Newhaven (50°40’N,0°08´E). Bayard opened fire at an estimated range of only 75 to 100 yards on one of the submarines; the U-boat dived, but not before Bayard was struck by a shell, which wounded two men. The Royal Navy Naval Staff Monograph identifies these two submarines as UC 66 (Pustkuchen) and probably U 85. The attribution to UC 66 is certainly correct, as the incident is mentioned in her KTB. UC 66’s KTB does not, however, describe a second U-boat involved in the action or any contact with U 85, so it would appear that Bayard’s crew was mistaken in believing a second U-boat was nearby.

Early on March 12, the steamer Tandil (2,897 grt, built 1900) was torpedoed and sunk 20 miles WxN1/2N of Portland or at about 49°36’N, 2°57’W. No surviving U-boat claimed this sinking. Admiral Arno Spindler, in the German official history, credits this sinking to U 85 but the time and location would be consistent with UC 68’s movements.

The Privet action was to happen some 8 and a half hours later only a few miles away. Lt. Commander C.G. Matheson, Privet’s commanding officer, claimed to have a sunk a U-boat as the submarine he engaged was observed to dive at a steep angle. Privet was unable to get to the spot where the U-boat had gone under. In any case, no oil, bubbles, or wreckage was observed. Admiral Sir Stanley Colville, Commander-in-Chief, Portsmouth, questioned at the time whether a submarine had actually been destroyed though Privet was ultimately awarded credit.

UC 68 did get her mines out before her loss, and time distance considerations preclude her from having done so before the Privet encounter. British minesweeping files account for 12 mines in two separate fields off Eddystone. Two ships hit these mines, the steamer Orsova at 50°11’N, 4°11’W on the 14th and destroyer HMS Foyle at 50°11’N, 3°58’W a day later. The Orsova was badly damaged and not repaired until after the war ended. The Foyle broke in two, with the bow sinking immediately. The aft portion was taken in tow but sank some 9 hours later. An additional 10 mines were swept up from the minefields that these ships encountered.

On March 13, a heavy explosion was heard 4.5 miles SE of Dartmouth. The Royal Navy thought that two mines had bumped together and gone off. Four more mines were swept up the same area the next day. The Royal Navy presumed these mines were laid on the night of March 12/13.

The Royal Navy did not know exactly when UC 68 sailed on her one and only patrol from Flanders. It attributed the boat’s destruction to being torpedoed in the North Sea by the submarine C7 on April 5, 1917. Given UC 68’s orders, this sinking claim though is unworkable as it would require an excessively long patrol.

Spindler, in the German official history, suggests that perhaps UC 68 was lost on her own mine, a fate that befell several other UCII minelayers. Ultimately, however, he does not say that this necessarily is the answer, but rather he notes that the available information is so vague that UC 68 must be regarded as missing.

There is no actual evidence to support that UC 68 was lost to her own mines. If two of her mines bumped and exploded on the 13th off Dartmouth, then all 18 of UC 68’s mines are accounted for. British documents do not suggest any debris or oil was observed as a result of this explosion. To date, no matching wreck has been found. While there is an UCII wreck off Dartmouth, it is heavily damaged forward and not aft, as one would expect of a boat that set off its own mine. That wreck is believed to be UC 49.

Conclusion
UC 68, like U 85, thus must be considered sunk at an unknown time and location. Unlike U 85, there is currently no obvious possible cause to account for her loss.