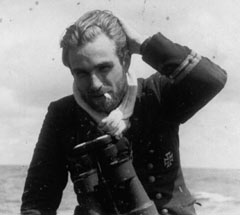 Encounter with the Japanese I-52

On 22 May, 1944 the boat left Lorient, France for operations in the Trinidad area. Outbound she was to rendezvous with the incoming Japanese submarine I-52 (huge boat, 356 feet and roughly 2600 tons) and supply the larger boat with a Naxos radar detector, Naxos operator and a German navigator to help navigate the end-leg of the journey.

The three German men, Pilot Lieutenant Schafer and Radiomen Petty Officers Schulze and Behrendt, all perished with the boat along with its Japanese crew.

The boats met on 23 June in the middle of the Atlantic, some 850 miles west of the Cape Verde Islands, and the exchange went well except the Naxos radar detector fell into the Atlantic, being retrieved by a Japanese who jumped in after it. U-530 immediately headed for Trinidad, finally returning to base after 133 days at sea. The Allies knew of the encounter and had the escort carrier USS Bogue at the scene and its aircraft managed to sink the I-52 with Fido torpedoes with the help of sonobuoys.

The I-52 seems to have been found in 3,2 mile deep water in 1995, I have seen photos of the wreck which are amazing. The interest in this boat, especially at this depth, is simple: She contains 2 tons of gold in 146 bars plus an assortment of other valuable industrial metals. Recovery was planned but according to an article in National Geographic (Oct 99) it was not possible to reach the gold and further attempts have been called off.

Unlike many other U-boats, which during their service lost men due to accidents and various other causes, U-530 did not suffer any casualties (we know of) until the time of her loss.