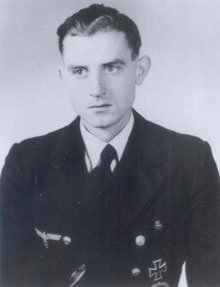 5 May 1944
At 0324hrs the boat was spotted in the moonlight by a British Liberator FK226 (86 Sqn RAF/G, pilot W/O M.G. Moseley) after being located by radar. Several attempts were made by the aircraft to get into a favorable position for an upmoon attack but eventually contact was lost. U-955 apparently crash-dived after firing at the Liberator and claimed to have shot it down, but it was not hit in the encounter. (Sources: Ragnar J. Ragnarsson)

Unlike many other U-boats, which during their service lost men due to accidents and various other causes, U-955 did not suffer any casualties (we know of) until the time of her loss.