To meet requirement R.2/33 of the Air Ministry for a general reconnaissance flying boat, Short developed the S.25 Sunderland from their famous S.23 "Empire" or "C-class" flying boat, the flagship of Imperial Airways. The S.25 first flew on 16 October 1937.

The Sunderland had a deep hull, and the wings were set high on the fuselage, to keep the engines and propellers away from the water spray. For the time, its size was very impressive. The hull had a single step, which served to break the suction of the water, and allow the flying boat to unstick. The characteristic blunt nose contained a two-gun turret, and the tail a four-gun turret. To correct a problem with the center of gravity, the wings were given a slight sweepback; the result was that the engines were slightly toed out. This cost some engine efficiency, but an advantage was that it improved controllability with one engine out. The stabilizing floats under the wing tips were attached by two struts and wire-bracing. On the water the aircraft was steered by canvas drogues, which were deployed through the galley windows.

The Sunderland was a pure flying boat, and if it had to be brought on shore special beaching wheels had to be fitted. Usually the Sunderlands were moored to a buoy. For this purpose, the front gun turret was rolled back and a chain was ran out. An anchor was on board, too. Daily maintenance was performed while the aircraft was moored. Supplies, fuel and ammunition were brought by boats, and some care was required to avoid damaging the hull. It was not uncommon for crews to live in their Sunderland between flights. If the aircraft was moored two men were required to be on board during the night, and during gales a pilot had to be on board because the engines were used to turn the aircraft in the wind. Of course the bilges had to be pumped out regularly, and for this both a manual pump and a pump driven by an Auxiliary Power Unit were installed. 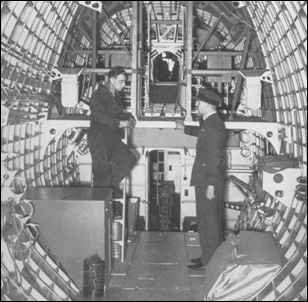 The Sunderland Mk.I was powered by four Bristol Pegasus XXII air-cooled radial engines of 1010hp. The fuel for these engines was held in ten self-sealing fuel tanks in the wings, for a total of 2552 gallons (11600 liters). In addition to the guns in the nose and tail turret, the Mk.I had two guns in hatches on the upper aft fuselage. The Mk.II had slightly more powerful Pegasus XVIII engines with constant-speed airscrews, and late in its production run a dorsal gun turret was introduced, replacing the hatches. The Mk.II also carried ASV Mk.II radar . The Pegasus engines and the dorsal turret were retained by the Mk.III, which also had a more streamlined hull with a faired step. This reduced drag, but could cause porpoising during take-off and landing. The Mk.IV was redesigned for operations in the Pacific; it was later renamed Seaford. Only six Seafords were built before the project was cancelled.

The Mk.V had American Pratt & Whitney R-1830-90B engines of 1200hp. Both the Pegasus and the R-1830 were very reliable engines, but the R-1830s had fully-feathering propellers, and in combination with the additional power this significantly increased a chance of a Sunderland to stay airborne with one or two engines out. The Mk.V also had four fixed, forward-firing guns, and two hatches in the aft fuselage for additional guns. The late production Mk.IIIs and the Mk.Vs had centimetric ASV radar. When the war broke out, Coastal Command had 34 Sunderlands in service. Over 700 Sunderlands were built and they served until 1959: 90 Mk.Is, 43 Mk.IIs, 456 Mk.IIIs and 150 Mk.Vs.

The fuselage of the Sunderland was roomy enough to give the crew of ten or more men some comfort on their long patrol flights, which could last up to 13 hours. The front part of the fuselage was divided in two decks. The upper deck contained the cockpit with the two pilots, and the stations for the flight engineer, the wireless operator and the navigator. There was also a compartiment for flares, and positions for the gunners.

On the lower deck there was a bomb room, were bombs or depth charges were stored on movable racks, which were moved to under the wing before an attack. For this purpose there were large rectangular doors under the wings. There was a bomb-aiming position in the nose, below the turret. The bomb load was small for such a large aircraft, but its primary task was reconnaissance. The lower deck also had a wardroom, a galley with two primus stoves and an oven, two bunks for off-duty crewmembers, a flush lavatory, a wash basin, and a shaving mirror. Crews would often collect their own set of dishes and cooking utensils, add curtains to the small wardroom, and install luxuries like a portable radio. 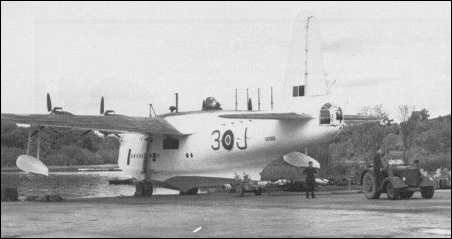 Rear view. This Sunderland is equipped with ASV MK.II

The Sunderland was easy and pleasant to fly, but for long patrols the pilots had the benefit of an autopilot. Its cruising speed was about 225km/h and it usually flew patrols at low altitudes. The main task of many Sunderlands was tracking enemy shipping, flying long patrols over an empty sea. Some crews never saw an enemy in the entire war. The Sunderland also flew search-and-rescue missions. It has to be pointed out that normally, the Sunderland could not land to pick up survivors. Like other flying boats, it could land and take-off only from sheltered coastal waters. From 1942 onwards, landings in open sea were expressly forbidden, except in special circumstances and with permission.

U-boat patrols, carrying eight depth charges, were an important task of the Sunderlands. They patrolled the approaches, or flew convoy protection missions. The two were often combined, with the Sunderlands meeting the convoys at some distance in the ocean. When an U-boat was sighted, the Sunderlands tried to attack it before it submerged. Although described as "depth charges", its bombs were set to explode at a depth of 25 feet to 30 feet, effective enough against surfaced submarines. Late in the war, the submarines were well-armed with Flak and willing to fight it out, while zig-zagging on the surface. In response, the Sunderlands were fitted with four fixed, forward-firing guns, to silence the Flak. The confrontations were extremely dangerous for both the Sunderland and the U-boat. Sunderlands also attacked small surface ships.

The Sunderland was vulnerable to enemy fighters, because it was slow and operated out of the range of Allied fighters. However, the later Sunderlands were well-armed, with nose, dorsal and tail turrets, gun hatches in the aft fuselage, and often some additional guns added by the crews. Flying low above the waves to prevent attacks from below, a Sunderland was not an easy victim, and managed to defend itself very well. For example, in 2 June 1943 a Sunderland survived an attack by eight Ju 88s, shooting down three of them, although it was riddled with holes, lost an engine, and several crewmembers were wounded. Such exploits allegedly earned it the German nickname of "Fliegendes Stachelschwein" (Flying Porcupine), although this could also be attributed to the large array of radar antennas fitted to many Sunderlands.

Perhaps the greatest weakness of the Sunderland was that its range, while significant, was not long enough the close the "mid-Atlantic gap". Coastal Command had to wait for the Liberator to cover the entire Atlantic. But where the Sunderland could operate, it was very effective.

26 U-boats lost to Sunderland aircraft. + means that the Sunderland shared the credit for the sinking.

Specifications of the Sunderland GR Mk.V