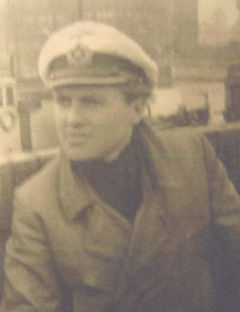 
Joachim Schepke began his naval career in April 1930. He spent two years on the 'pocket battleship' Deutschland before, as Günther Prien also had, transferring to the U-boat force in October 1935. Later he spent 18 months as an instructor at the Torpedo School at Flensburg, but in 1938 he became commander of the training U-boat U-3. His time commanding U-3 saw him achieve his first successes, leaving her in January 1940.

But it wasn't until her second patrol during September 1940 that Kapitänleutnant Schepke became famous as commander of U-100. In only two days he sank seven ships with a total of 50,340 tons. Two days later he received the Knights Cross. 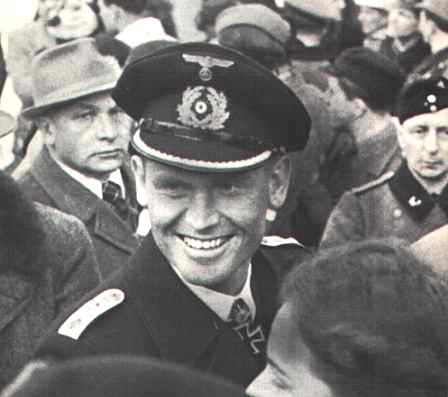 23 November 1940 was another memorable day, on which Schepke sank seven ships totaling 24,601 tons. One week later he was awarded the Oak Leaves to his Knights Cross.

In 1940 he published a book, U-Boot Fahrer von heute (U-boat men of today), describing life on a U-boat in simple terms. This book is illustrated with his own paintings.

Schepke was nicknamed Ihrer Majestät bestaussehender Offizier (Her Majesty's best-looking officer. The expression Ihrer Majestät is used to indicate the country's leader, and is not referring to royalty in this case!).

At the Berlin Sportpalast in February 1941 he spoke to an audience of thousands of young Germans about the U-boat war.

Joachim Schepke died when U-100 was sunk at 0318hrs on 17 March 1941 SE of Iceland in approximate position 61N, 12W, after being rammed and depth charged by the British destroyers HMS Walker and HMS Vanoc (Niestlé, 1998). Vanoc located U-100 with her early radar in heavy fog and chased the contact. Schepke is said to have been caught on the bridge when the boat was rammed. Six men survived and 38 were lost.