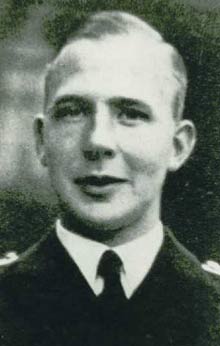 Ulrich Graf von Soden-Fraunhofen joined the Kriegsmarine in 1935. Between Sept 1939 to March 1941 he served in minesweeping flotillas and units, joining the U-boat force in April 1941.

In Oct 1941 Obltnt. Soden-Fraunhofen was assigned as 1st Watch Officer to the successful U-552 (Topp). He went on two patrols with the boat, a total of 67 days at sea. Ironically, these were among the least successful of U-552's patrols, but the experience of serving under a veteran like Erich Topp was invaluable.

From March to May 1942 Soden-Fraunhofen received U-boat commander training prior to commissioning the type VIIC U-boat U-624 on 28 May. The first patrol (56 days in the North Atlantic) was highly successful, with a tally of seven ships sunk (35,616 GRT) and one damaged.

On the second patrol in the Atlantic Kptlt. Soden-Fraunhofen died with his entire crew (44) when U-624 was sunk by a British B-17 Flying Fortress.