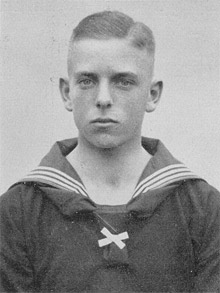 Helmut Vogler joined the Kriegsmarine in 1935. He went through U-boat training from Oct 1940 to March 1941. From March to April 1941 he went through U-boat familiarization (Baubelehrung) to prepare to serve as an officer on a new type VIIC U-boat. On 24 April 1941 the new U-567 was commissioned at Hamburg by Kptlt. Theodor Fahr (Busch & Röll, 1999).

Vogler served as the First Watch Officer on the boat until Dec 1941. The first 4 months were spent training in the Baltic (Busch & Röll, 1999). In the fall of 1941 Vogler went out on its first 2 war patrols, first with Fahr but the second patrol was with the famous ace Kptlt. Engelbert Endrass. Vogler spent 72 days at sea with the boat before leaving it prior to its fateful last patrol where it was sunk with all hands on 21 Dec 1941 (Niestlé, 1998).

From Dec 1941 to Feb 1942 Vogler went through U-boat Commander training with the 26th (Training) Flotilla and then began another U-boat familiarization (Baubelehrung). This time Vogler was being prepared for his own command (Busch & Röll, 1999).

Kptlt. Helmut Vogler sailed on his first 7 patrols with the U-212 in the Arctic Ocean against the Russia convoys. His 8th patrol was a transit to the French bases during which he operated in the North Atlantic for 53 days. From Jan 1944 on he sailed from La Pallice, France against the North Atlantic convoys (Busch & Röll, 1997).

Kptlt. Vogler sailed on 15 patrols with his U-212, spending 339 days at sea (Busch & Röll, 1997). He survived longer than many as 12 of these patrols were from March 1943 onwards against the massive Allied anti-submarine build-up.

On 5 July 1944 Kptlt. Helmut Vogler sailed from La Pallice towards the English Channel. This was a month after the D-Day landings - against the plentiful shipping to support the invasion of France.

Kptlt. Helmut Vogler and his entire crew, 49 men, were lost when U-212 was sunk on 21 July 1944 in the English Channel south of Brighton by depth charges from the British frigates HMS Curzon and HMS Ekins (Niestlé, 1998).