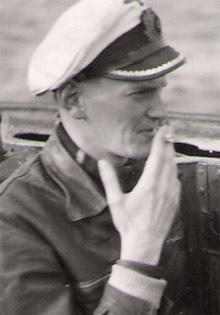 Wiechmann was born on August 31, 1909 in Schwaan, Mecklenburg, Germany. He joined the Kriegsmarine in 1939. From June 1942 to July 1943 he served as Watch Officer on the 6th Sperrbrecher Flotilla (armed ships).

Wiechmann began his basic U-boat training, Watch Officer and Commander courses in August 1943 and finished in Oct 1944. He was then sent to his U-boat familiarization (Baubelehrung) in order to prepare for his first command. He commissioned the new type XXIII Elektro boat U-4701 at Kiel on 10 Jan 1945.

With his boat assigned to the 5th Flotilla (training) he began to work up the boat and men in the Baltic. He never went out on patrol as the war ended before the boat was combat ready. Oblt. Arnold Wiechmann scuttled his boat at the Hörup Haff on 5 May 1945 (Niestlé, 1998).

He immigrated to the United States in the 60's or earlier and became a US citizen.