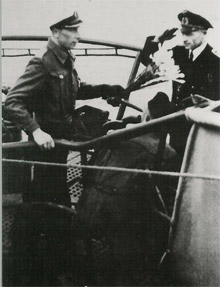 Herbert Zoller joined the Kriegsmarine in 1938, and received initial training on the square-rigged school ship Gorch Fock from March to June 1939. He then spent two months on the light cruiser Emden before going through further training from Sept 1939 to April 1940. He was at the Military hospital at Kiel from May to June 1940 (Busch & Röll, 1999).

Zoller served on the battleship Gneisenau from July to Oct 1940 before joining the U-boat arm and undergoing standard instruction from Oct 1940 to March 1941, followed by U-boat familiarization (Baubelehrung) on a U-boat under construction (Busch & Röll, 1999).

On 8 May 1941 the type VIIC U-569 was commissioned at Hamburg by Kptlt. Hans-Peter Hinsch and Herbert Zoller took on his duties as a Watch Officer (WO). After three months of working up exercises in the Baltic they left on the first patrol from Trondheim, Norway on 11 Aug 1941 (Busch & Röll, 1997).

Oblt. Herbert Zoller arrived at Trondheim, Norway after his last patrol on 24 April 1945. The boat was stricken from the German Navy at Trondheim on 1 May and then surrendered to the Allies on 9 May 1945 (Niestlé, 1998).