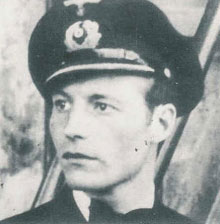 He served on U-124 during Mohr’s first four very successful patrols (22 ships sunk and three damaged). After this valuable experience he underwent Commander Training with the 24th (Training) Flotilla at Memel August – early Sept. 1942 before taking over command of U-505 (Loewe) on 6 Sept. 1942.

Peter Zschech thus had an excellent grounding for U-boat command and great things were expected of him. He failed to live up to these high expectations and was, according to many accounts, not well liked by his crew. Repeated sabotage discovered at the start of the patrol which forced a return to port on several occasions must also have affected his morale.

During almost 14 months in command he spent only 96 days at sea during six patrols (three of which, in August 1943, were abortive one-day attempts). Only the first patrol, of 69 days, proceeded without incident and during it he sank his only ship, the 7,173 ton British merchant Ocean Justice, sunk without casualties off South America.

While outbound east of the Azores on 24 Oct. 1943 U-505 came under heavy depth charge attack. Peter Zschech apparently broke down and took his own life with his service pistol in the control room of the boat. The IWO, Oblt. Paul Mayer (26 years of age), took command, evaded the pursuers and returned the boat to Lorient on 7 Nov. 1943.

The approximate location of the boat during the attack