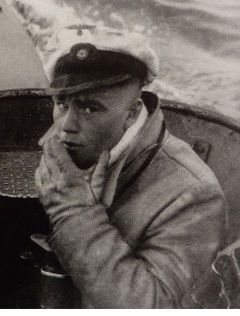 Uwe Christiansen entered the Kriegsmarine on October 1, 1938 as a member of Crew 38 known as “Grossdeutschland” (e. Greater Germany).

He went on five patrols on U 572 (Heinz Hirsacker) as II. Wachoffizier (the first four patrols) and as I. Wachoffizier (fith patrol) in the period Sept 1941 to Sept 1942. U-boat commander training at Memel in the Baltic with the 24. Training flotilla from Oct to Nov 1942. 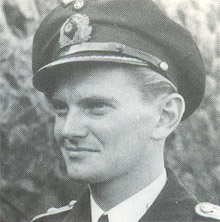 He was to take command of the large type XXI Elektro boat U-2505 and joined her as construction commander from May 1944 but the boat was severely damaged by Allied bombs at Hamburg in June 1944 before commission. He then switched over her sister boat U-2508 in July 1944 and commissioned her on 26 Sept 1944. The boat was severely damaged during its training in November 1944 and repairs had not been completed at the end of the war.

He then took command of the smaller type XXIII Elektro boat U-2365 from 3 May, 1945. The boat was abandoned on May 8, 1945 in the Kattegat and scuttled. In 1957 the boat became the first submarine of the new German navy (Bundesmarine), named “U Hai”.

After the end of the war Uwe Christiansen became a Commander of the minesweeper M 608 (2. Minensuchflottille/I. Minenräumdivision) based at Fredericia and Copenhagen from May 1945 to November 1945. He was discharged from the Kriegsmarine on November 3, 1945.