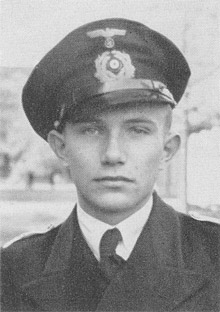 Otto Eberlein joined the Kriegsmarine in 1938. From Aug to Nov 1941 he served in Harbour Defence Flotilla at Trondheim, Norway. He then served in patrol boats with the 59th VP-Flotilla until July 1943.

From July 1943 to Jan 1944 he went through basic U-boat training, and then from Feb to March 1944 took the U-boat Commander Course. In March he was sent to Baubelehrung (U-boat familiarization) until May when he took command of his U-1020 on the 17th.

On his first patrol his boat went missing and no explanation exists for its loss. His official date of death listed as 3 Jan 1945.