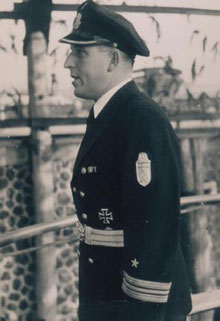 On Jan 2, 1944 the boat was attacked by two British B-24 Liberators from Sqdn 224. Benker managed to drive the first aircraft off but ordered dive when the second bomber threatened the boat.

During the dive the Naxos wire running into the tower prevented a safe seal Benker thought and cancelled the dive and went up with another man to clear the wire and secure the boat. Sadly the order to cancel the dive was not recognised and the boat continued the dive causing Benker and the other man to drown. (Blair, 1998).