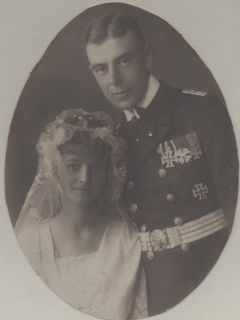 Received the Pour le Mérite on the same day as Kaplt. Paul Hundius. Awarded for outstanding leadership and distinguished naval planning and successful submarine operations and also given in recognition of the sinking of a total of 206.000 BRT of enemy shipping.

After the war he stood accused of a number of war crimes; Sinking without warning the Clearfield, Artist,Trevone, Torrington, Toro and attacking the hospital ships Rewa and Guildford Castle.

In the course of time this was reduced to a single charge of sinking the SS Torrington and murdering the whole crew save the captain who was taken prisoner.

He never appeared at the Leipzig trials, he fled Germany to work on a coffee plantation in Brazil. After some years he returned to Germany and even became a National Socialist member of the Reichstag.