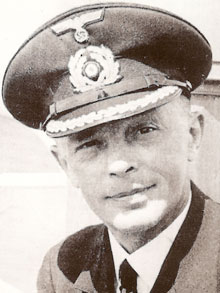 Hermann von Fischel was the son of Admiral Max von Fischel. The Fischel family was taken into the nobility on June 15, 1908, allowing the use of “von” in the family name. Previous to that date, the future U-boat commander was known as Hermann Fischel.

Hermann von Fischel rose to the rank of admiral during WWII. He commanded the pocket battleship Deutschland from April 1933 through Dec 1935. Hermann retired from the navy in Dec 1944 but was captured by the Russians and died 5 years later near Moscow as a prisoner.

His son, Unno von Fischel, commanded the U-374 in WWII until its sinking on 12 Jan 1942. Unno and all but one of his men perished.