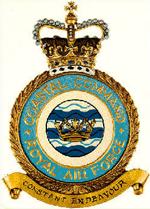 When the war began the RAF Coastal Command was far from ready for it. It had nothing to attack let alone sink the German U-boats. The U-boat weapon available at the time was the anti-submarine bomb that was far from effective and required a direct hit to do any damage. To make matters worse the Command was always secondary to the Bomber Command for equipment and aircraft.

During the spring of 1940 experiments were carried out to see if an aircraft could successfully drop a depth charge (A Royal Navy model little changed from WWI). This was proven feasible if the aircraft was not too high or travelling too fast. Thus the MK. VII depth charge became the new weapon for Coastal Command's aircraft. These were later replaced by Torpex-filled depth charges with more explosive power.

When the war began the Command only had 3 Operational Groups, 15, 16 and 18 with Group 17 taking care of training.

No. 16 Group had its HQ in Gillingham in Kent. This was not really an anti U-boat unit but its aircraft did attack U-boats in the last days of the war.

No. 18 Group had its HQ in two places; operations were planned at Donibristle while the admin section was at Pitreavie. After the German loss of the Biscay bases in late 1944 it helped counter the threat of U-boats from Germany and Norway.

No. 19 Group was formed about the same time as No 15. Group moved northwest from Plymouth and No. 19 moved into the old HQ and made its home there. This Group covered the Bay of Biscay and nearby waters. It scored the greatest number of U-boat kills as it patrolled the area of highest concentration of the enemy.

One week after the war began Coastal Command set up a base in Gibraltar to cover the southern part of the Bay of Biscay and the waters closest to this entry into the Mediterranean. This was a very important base of course.

Operations in Iceland began in May 1940 and by 1942 its aircraft were providing convoy cover and giving U-boats major troubles in those waters previously free of aircraft.

In late 1943, after a British-Portuguese agreement, Coastal Command put aircraft of the No. 247 Group on the Azores, beginning operations in October with two B-17 Fortress squadrons supported by two Leigh Light detachments from Gibraltar.

Related page
Read about the Fight Back order of 1943. This order ensured some major battles between aircraft (mostly RAF) and the U-boats.

Please note
This page is not complete as such, if you have any information you feel should be found here please contact me.