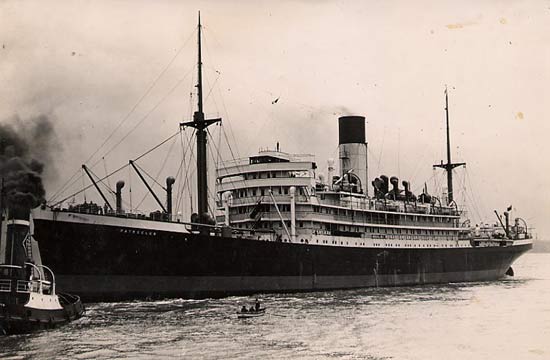 4 Nov 1940
Patroclus was leaving her patrol area when she received distress calls from HMS Laurentic, another armed merchant cruiser just arrived to replace Patroclus from Northern Patrol duty. Patroclus turned back and found Laurentic still afloat but in a very poor condition, as it had been torpedoed by Kretschmer's submarine. Told by megaphone from Laurentic not to stop, Patroclus moved around and dropped a couple of depth charges to scare off the sub.

When apparently there were no signs of the German boat, she stopped and began the rescue operation, because it was clear that Laurentic was sinking. Already at night, Patroclus was hit by a torpedo near the stern. The ship listed, and a few minutes later, another torpedo hit the ship. A third torpedo followed. The ship was by then sinking slowly, due to the fact that auxiliary cruisers were filled with empty oil drums to keep them afloat as long as possible if hit. Fortunately for the survivors, the destroyer Achates has received the SOS call from Laurentic and arrived around 2.00 a.m. At first, she tracked the submarine with her asdic, and soon after began the rescue operations. Then another destroyer, HMS Hesperus, turned up.

76 men out of a crew of 306 from Patroclus lost their lives, including her Commander, Cpt. Gerald Wynter (a veteran from WW I, where he commanded the destroyer HMS Magic that fought in Jutland). The rest were picked up by the two destroyers.

Later in the war, the Commander of HMS Hesperus, Cpt. Donald McIntyre, was reassigned to the destroyer Walker, and in March 1941 sunk Otto Kretschmer U-99, taking him with most of his crew prisoners.