Sloop of the Folkestone class 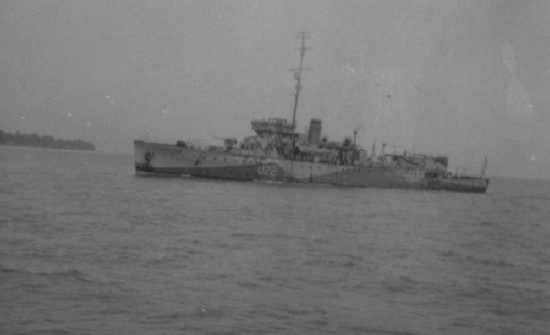 HMS Folkestone as seen during the war.

[It is possible some of these ships did not sail from Freetown but joined the convoy at sea.]

At 1600Z/24, HMS Olympus parted company with the convoy and proceeded to join convoy OG 56.

Upon completion of this exercise all three ships joined the escort of convoy HG 66 (11th war patrol).

For the daily positions of HrMs O 21 during this patrol see the map below.

This convoy departed Freetown on 15 October 1941 for Liverpool where it arrived on 6 November 1941.

HMS Gurkha and HrMs Isaac Sweers both parted company with the convoy on 17 October to fuel at Barhurst. They rejoined the convoy on the 18th but left on the 22nd and then proceeded to Gibraltar where they arrived later the same day.

No ships were lost from this convoy.

Around 1500A/21, the Oran Section of the convoy parted company. The Oran Section was made up of the Andes, Borinquen and the Rangitiki. They arrived at Oran around 1730A/21 escorted by HMS Milne, HMS Quality, HMS Quentin and HMAS Quiberon.

The remainder of the convoy arrived at Algiers on 22 November.

HMS Wellington parted company on 13 December 1942 and proceeded to Londonderry due to weather damage she had sustained.

on the 17th it was reported that the Irénée du Pont was returning to the Clyde due to weather damage.

The convoy passed through the straits of Gibraltar during the morning of 20 December 1942. The convoy had been delayed due to adverse weather conditions being encountered on passage from the U.K.

HMS Laforey and HMS Lightning also made a call at Gibraltar before rejoining the convoy. Both fuelled, discharged stores brought out from the U.K., and made a few small repairs to weather damage, before proceeding to rejoin the convoy.

The transports Manchester Citizen and Zoella Lykes, which had lost contact with the convoy due to the weather conditions, arrived at Gibraltar on 20 December 1942.

On 20 December 1942, the destroyers HMS Milne (Capt. I.M.R. Campbell, RN), HMS Meteor (Lt.Cdr. D.J.B. Jewitt, RN), HMS Pathfinder (Cdr. E.A. Gibbs, DSO and Bar, RN) and HMAS Quiberon (Cdr. H.W.S. Browning, OBE, RN) departed Mers-el-Kebir to make rendezvous with the convoy and then take the Oran section of the convoy with them to Oran the following day. They made rendezvous with the convoy around 1700A/20. The Oran section made up of the Duchess of Richmond, Duchess of York, Empress of Canada, Elisabeth Bakke, Exiria, Pardo and Silverlaurel parted company with the convoy around 0200A/21.

Around 0630A/22, the troop transport Cameronia, which was to proceed to Bone, had been hit by an aircraft torpedo in position 37°03'N, 05°24'E. An hour later it was reported that she was making for Bougie escorted by HMS Scylla and HMS Wheatland which later parted company to rejoin the convoy. From Bougie the tug Hengist and the M/S trawlers HMS Inchcolm (Skr. A.C. Whitcombe, RNR), HMS Mull (Lt. J. Plomer, RCNVR) and HMS Rysa (T/Lt. J.H. Cooper, RNVR) were sent to her assitance.

[Further research regarding this convoy is required.]

On 15 January 1943, HMS Wayland parted company and entered Gibraltar. HMS Weston made a short stop at Gibraltar to disembark stores. She rejoined the convoy on the 16th. During the time HMS Weston was not with the convoy the destroyer HMS Vanoc ( A/Cdr. C.F.H. Churchill, RN) took her place.

Around 1500A/16, the Franconia and Reina del Pacifico parted company with the convoy to proceed to Oran escorted by the destroyer HMAS Quiberon (Capt. H.W.S. Browning, OBE, RN) which had escorted the tanker Gulfport (American, 8081 GRT, built 1942) from Oran to the rendezvous with the convoy. The Gulfport then joined the convoy for passage to Algiers.

This combined convoy assembled off Oversay on 19 June 1943.

On 21 June HMS Folkestone was detached to return to Londonderry for repairs to defective hull plating.

On 24 June the merchant vessel Dornoch straggled from the convoy. The next day HMS Folkestone was ordered to search for her. She had departed Londonderry to overtake the convoy on 24 June having effected repairs there.

Cover for the convoy during part of the passage was provided by the AA cruiser HMS Charybdis (Capt. G.A.W. Voelcker, RN).

En-route the merchant vessels Baron Ramsay, Merkland and Stanhope were detached to Lisbon as was the Coity Castle which was detached to Huelva.

On 28 June the convoy escort was reinforced by the escort destroyer Holcombe and Viceroy.

The Orangeleaf also was part of KMS 17G as were HMS Abercrombie and HMS Robert.

These were joined by the merchant vessels which had made up convoy OS 50G which had been brought out of Gibraltar by the escortx which took over convoy KMS 17G, except for HMS Columbine which joined convoy OS 50.

The following merchant vessels were then detached to Casablanca; Fort Laird and Fort Senneville.

The merchant vessel Godfrey B. Holt was detached to Bathurst.