Sloop of the Falmouth class 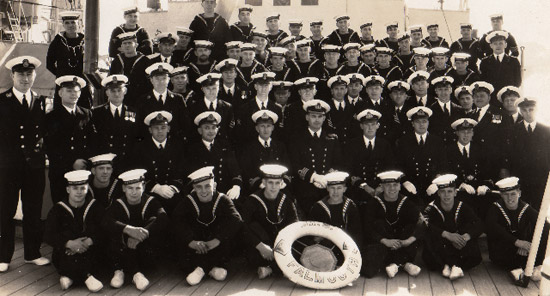 [Part from the Freetown to Durban.]

The convoy was to proceed to Durban via Porte Noire.

In the afternoon of 2 December 1941, HMS Royal Sovereign, HMS Dulverton and HMS Southwold left the convoy to proceed ahead to Porte Noire where they arrived in the morning of 5 December and then took on board fuel. They departed again in the evening to rejoin the convoy which they did at 0600/6.

HMS Falmouth, HMS Hollyhock and HMS Verbena then proceeded to Porte Noire to fuel. They rejoined the convoy at 0630/7.

At 0001/18 HMS Royal Sovereign and HMS Milford were detached and proceeded ahead of the convoy to Durban where they arrived at 0600 hours the same day.

The remainder of the convoy arrived later the same day.

This convoy departed Bombay on 21 December 1941 and arrived at Singapore on 3 January 1942.

On 27 December HMS Falmouth and HMIS Sonavati parted company with the convoy and proceeded to Colombo.

On the morning of 3 February the British destroyer HMS Encounter (Lt.Cdr. E.V.St J. Morgan, RN) joined. Later the same day HMAS Vampire split off from the convoy with the part of the convoy that was to proceed to Batavia. These were all the ships that had been in convoy DM 2 except the City of Canterbury which went to Singapore. The Batavia section arrived there shortly after noon on 3 February.

Around 0200 hours on 4 February 1942, HrMs Java parted company with the convoy. Shortly before noon the convoy was attacked by Japanese aircraft and the Empress of Asia was straddled. Around 2130/4, HMS Exeter, HMS Jupiter and HMS Encounter parted company to intercept Japanese warships that were reported to the north of Banka Strait. HMAS Hobart (Capt. H.L. Howden, CBE, RAN) was ordered to join them there. They did not find any Japanese ships and proceeded to Batavia where they arrived on 6 February.

The convoy arrived at Singapore shortly after noon on 5 February 1942 but not before a heavy enemy air attack was carried out. The Empress of Asia was set on fire, the Felix Roussel was also hit and the City of Canterbury had her steering gear damaged. (4)

This convoy departed Batavia, Netherlands East Indies on 12 February 1942. Destination for the majority of the convoy was Colombo where the convoy arrived on 21 February 1942

Two damaged British warships were towed by two of the merchant vessels of the convoy. Both these warships had been damaged in 1941 while in action in the Mediterranean and had been sent to Singapore for repairs and refit. These were not completed when the Japanese attacked. Both ships had been towed from Singapore to Batavia. The warships were the destroyer HMS Isis (Lt. L.R.P. Lawford, DSC, RN) and the submarine HMS Rover (Lt.Cdr. G.H. Reynolds, RN). They were towed by the Malancha and the City of Pretoria respectively.

Escort was provided by the destroyer HMS Express (Lt.Cdr. F.J. Cartwright, RN) and the sloop HMIS Sutlej (Capt. P.A. Mare, RIN). On 14 February 1942 the heavy cruiser HMS Dorsetshire (Capt. A.W.S. Agar, VC, DSC, RN) joined until the 17th when she parted company with the convoy. On the 20th the convoy was joined by sloop HMS Falmouth (Cdr. U.H.R. James, RN). The Malancha with HMS Isis in tow and the City of Pretoria with HMS Rover in tow then parted company with the convoy and proceeded to Trincomalee where they arrived on 21 February 1942 escorted by HMIS Sutlej. The remained of the convoy arrived at Colombo, also on the 21th, they were escorted by HMS Express and HMS Falmouth. HMS Express had suffered from a fire in the no.1 boiler room which could not be repaired at Singapore / Batavia / Surabaya so the was sent to Colombo for repairs.

The convoy, minus the Elizabethville departed Kilindini for Durban. HMS Valiant was still with the convoy.

HMS Valiant did not enter Durban. She remained at sea to continue on to Capetown with a new escort.