Sloop of the Egret class 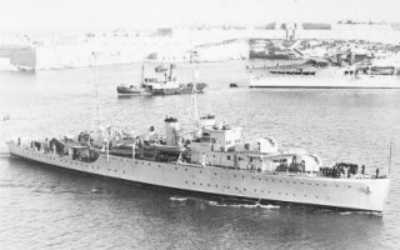 Later this day, Brittanic, Duchess of Bedford and Reina del Pacifico departed Aden eastwards. They were escorted by HMS Liverpool. (2)

Valentine then proceeded to escort duty with southbound convoy FS 160. (4)

This convoy departed Liverpool on 13 October 1941 for Freetown where it arrived on 5 November 1941. Several merchant ships were detached en-route for other destinations.

On 24 October 1941 the Gibraltar (and Lisbon) section of the convoy split off. This were nine merchant vessels escorted by HMS Fowey, HMS Leith and HMS Stonecrop. The destroyer HMS Wild Swan (Lt.Cdr. C.E.L. Sclater, RN) departed Gibraltar on 25 October to join the convoy on the 27th. Two more destroyers, HMS Gurkha (Cdr. C.N. Lentaigne, RN) and HrMs Isaac Sweers (Cdr. J. Houtsmuller, RNN) departed Gibraltar in the morning of 28 October and they joined the convoy in the afternoon of the next day. The convoy arrived at Gibraltar on 1 November. The previous day the ships destined for Lisbon had split off.

23 Aug 1943
On the 23th August 1943 the 40th Escort Group (Cdr. Dallison), consisting of the sloops HMS Landguard, HMS Bideford, HMS Hastings and the frigates HMS Exe, HMS Moyola and HMS Waveney were deployed on a U-boat hunt off Cape Ortegal. The whole operation was covered by the British light cruiser HMS Bermuda.

On the 25th August the Canadian 5th Support Group (Cdr. Tweed), consisting of the British frigates HMS Nene, HMS Tweed and the Canadian corvettes HMCS Calgary, HMCS Edmundston and HMCS Snowberry were deployed to relieve the 40th Escort Group. While this was in progress the ships were attacked at 1415 hrs by 14 Dornier Do-217's and 7 Ju-88's. with the new German weapon, the Henschel Glider Bombs, (the "Hs293 A-1"). Designed by the German Professor Herbert Wagner. HMS Landguard and HMS Bideford were the first of the Allied and R.N. ships to be attacked and damaged by them. This being the first time of their being brought into action against Allied ships. Several sailors were injured on HMS Bideford and one sailor was killed.

Another two days later on the 27th August 1943 the Canadian 5th Support group was relieved by the 1st Support group (Cdr. Brewer) consisting of the sloops HMS Pelican, HMS Egret and the frigates HMS Jed, HMS Rother, HMS Spey and HMS Evenlode. Also the covering cruiser HMS Bermuda was relieved by the Canadian destroyer HMCS Athabaskan and the British destroyer HMS Grenville. These ships were also attacked by the Germans. This time with 18 Dornier Do-217?s also carrying Henschel Glider Bombs. HMCS Athabaskan was heavily damaged and HMS Egret was sunk with the loss of 194 of her crew. After this loss the U-boat hunt was blown off.

16 Aug 2009
My father, Lewis Thompson, was one of the few survivors of the sinking of the HMS Egret. He passed away last year at the age of 88. In 2007 he met with the grandson of one of his shipmates that did not make it, Ordenanceman John W. Chapman. His stories of the Egret were always exciting and I know the sinking had a profound effect on him. I miss him. (14)