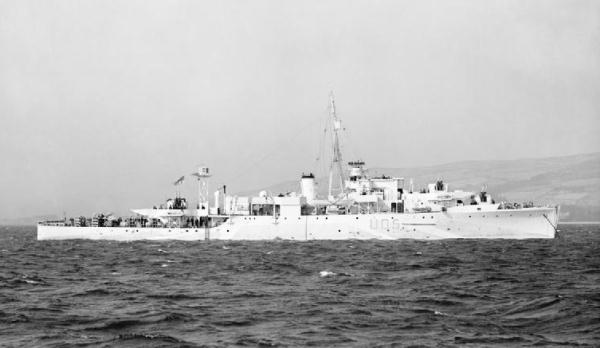 Commands listed for HMS Chanticleer (U 05)

Upon completion of the exercises Upstart departed Lough Foyle for Holy Loch escorted by HMS Chanticleer. (2)

Towage of AFD 18 from Oban to Oran.

In the late evening of 28 May 1943 the Floating Dock AFD 18 departed Oban for Oran. The dock was being towed by the tug HMS Bustler.

Cover during part of the passage was to be provided by the AA cruiser HMS Charybdis (Capt. G.A.W. Voelcker, RN) which departed Plymouth on 31 May.

The tow experienced difficulties and much delay.

This resulted in that some of the escorts had not enough fuel to reach Gibraltar and on 7 June they were all relieved by the destroyer HMS Boreas (Lt.Cdr. E.L. Jones, DSC, RN) and escort destroyer HMS Melbreak (Lt. G.E.C.G. Baines, RN) which had departed Gibraltar on 5 June. Later the corvette HMS Cyclamen (?) and the A/S trawlers HMS Huddersfield Town (A/Skr.Lt. J.H. Consadine, DSC, RNR) and HNoMS Molde also joined. These too had departed Gibraltar on 5 June.

This convoy was assembled off Oversay on 18 August 1943.

HMS Charybdis parted company with the convoy around 2210B/21 and proceeded to Gibraltar arriving there on 22 August.

The entire combined convoy arrived at Gibraltar on 24 August 1943.

From Gibraltar the convoys continued on as KMF 22 and WS 33.