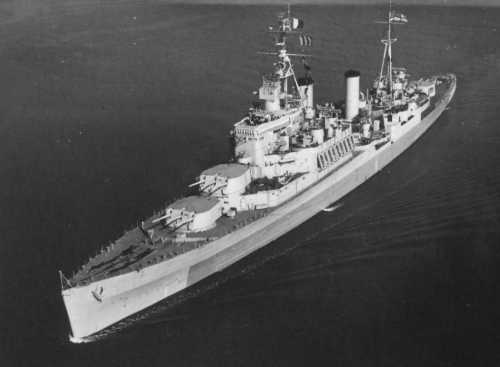 HMS Uganda during the war

This convoy was only made up of one ship, the troopship Queen Mary (British, 81235 GRT, built 1936). She departed the Clyde on 5 May 1943 for New York and had on board about 5000 German POW's and also Prime Minister Churchill and his staff.

On 5 May 1943, the light cruiser HMS Glasgow (Capt. E.M. Evans-Lombe, RN) departed Scapa Flow to provide cover. HMS Glasgow returned to Scapa Flow on 10 May apparently having turned back on 8 May.

Also on 5 May 1943, the aircraft carrier HMS Indomitable (Capt. G. Grantham, CB, DSO, RN) departed Greenock to provide air cover for the Queen Mary during the first part of her voyage. The carrier was escorted by the destroyers HMS Matchless (Lt.Cdr. J. Mowlam, DSO, RN), HMS Mahratta (Lt.Cdr. E.A.F. Drought, DSC, RN) and HMS Eclipse (Lt.Cdr. E. Mack, DSO, DSC, RN). They turned back very late on 6 May and HMS Indomitable and HMS Eclipse returned to the Clyde on the 8th. HMS Matchless and HMS Mahratta were detached on the 8th to proceed to Scapa Flow where they arrived later on the same day.

The Queen Mary then continued on escorted by HMS Uganda.

The Queen Mary and her USN escort arrived at New York on 11 May.

On 25 June HMS Arrow and HMS Amazon parted company with the combined convoy to proceed to Casablanca to fuel. They arrived at Casablanca around 1730A/25.

On the 26th, HMS Uganda, HMS Guardian, HMS Viceroy and one of the transports arrived at Gibraltar.

On the 27th, HMS Uganda, which apparently had rejoined the convoy after a brief stopover at Gibraltar, 7 of the transports and HMS Wallace, HMS Woolston, HMS Hambledon, HMS Mendip, HMS Blankney, HMS Blencathra, HMS Brecon and HMS Brissenden arrived at Algiers.

The convoy was now escorted by the destroyers HMS Foxhound, HMS Bulldog and the escort destroyer HMS Blackmore.

The destroyer HMS Amazon also rejoined after fuelling at Casablanca. It had originally been the intention that HMS Arrow was also to rejoin the convoy but while at Casablanca orders had been received that she was to proceed to Gibraltar instead.

in the early afternoon of the 7th, in approximate position 03°15'N, 14°54'W the Rangitiki was to be detached to proceed independently to Montevideo.

On the 10th HMS Bulldog and HMS Blackmore were detached to proceed to Lagos to fuel and then escort transports from there to join the convoy. HMS Corfu was also detached on the 10th to proceed to Ascencion after first calling at Takoradi.

When these ships joined HMS Foxhound, HMS Witch and HMS Armeria then parted company and proceeded to Lagos arriving there also on the 11th.

HMS Despatch and HMS Rapid arrived at Pointe Noire to fuel at 0700Z/14. They departed again to rejoin the convoy at 1430Z/14.

At 1800Z/14, the Quercy, HMS Bulldog and HMS Blackmore arrived at Pointe Noire.

The convoy arrived at Capetown on 21 July 1943. HMS Despatch, HMS Quadrant, HMS Rapid and HMS Redoubt then continued on to Simonstown arriving there later the same day.

A much reduced convoy WS 31 departed Capetown on 26 July 1943. It was now made up of the transports Arawa, Highland Brigade, Highland Monarch, Staffordshire, Stirling Castle and Stratheden. The convoy was escorted by the light cruiser HMS Despatch and the destroyers HMS Quadrant and HMS Redoubt.

They were relieved near Mauritius on 4 August 1943 by the heavy cruiser HMS Frobisher (Capt. J.F.W. Mudford, RN) which took the convoy to Bombay where it arrived on 13 August 1943.

Around 0500 hours several enemy aircraft attacked ' Force K '. Bombs were dropped close to HMS Laforey but she sustained no damage.

During the day several bombardments were carried out. Around 0900 hours HMS Mauritius commenced a bombardment of the towns of Lentini and Carlentini. She had to break off this bombardment at 0923 hours when a heavy shore battery opened fire on her. This battery was then taken under fire between 0940 and 1000 hours.

At 1000 hours another coastal battery near Brucoli was then being fired upon briefly by HMS Newfoundland and all destroyers.

Also around this time HMS Orion, HMS Uganda and HMS Nubian parted company to proceed to Malta to load ammunition and fuel. They arrived at Malta around 1430 hours.

Around noon both HMS Loyal and HMS Mauritius reported being attacked by aircraft.

Around 1630 hours, HMS Loyal was detached to Malta.

Between 1700 and 1724 hours, HMS Mauritius bombarded a target to the south of Catania. Coastal batteries opened fire on her and at 1724 she was straddled and then withdrew out of range of the heavy coastal battery.

At 1705 hours, HMS Newfoundland briefly bombarded Lentini (only for 2 minutes).

At 1950 hours, HMS Newfoundland, HMS Mauritius, HMS Laforey and HMS Lookout formed formation and retired to seaward for the night.

HMS Newfoundland had carried out two bombardments on this day and HMS Mauritius seven. The monitor HMS Erebus (Cdr.(Retd.) H.W. D'Arcy-Evans, RN) was also operating in the area. (3)

During the day these ships were attacked several times by enemy aircraft but no damage was sustained.

At 0839 hours, HMS Newfoundland opened fire on an enemy battery. Fire was ceased at 0916 hours when the battery was reported to have been destroyed.

At 1110 hours, HMS Newfoundland opened fire on a machine gun nest. Fire was ceased at 1119 hours when it was reported to have been destroyed.

At 1450 hours, HMS Newfoundland opened fire on a shore target. Fire was ceased at 1525 hours when it was reported to have been destroyed.

At 1705 hours, HMS Newfoundland opened fire on an enemy gun emplacement. Fire was ceased at 1735 hours when the target was reported to have been destroyed. Heavy explosions were observed in the target area.

Around 1800 hours, HMS Newfoundland, HMS Mauritius, HMS Laforey and HMS Lookout departed the area to proceed to Malta to fuel and re-ammunition. They arrived at Malta around 2215 hours.

Around 2020 hours, both HMS Uganda and HMS Orion commenced a short bombardment of Catania. Fire was ceased after around ten minutes. (4)

13 Sep 1943
During the landings at Salerno HMS Uganda (Capt. W.G. Andrewes, RN) is hit by a German radio controlled glider bomb. The bomb hit the ship on the starboard side aft and went through seven decks and the ship's bottom before it exploded. The ship went Charleston, South Carolina, USA for repairs and was subsequently transferred to the RCN.