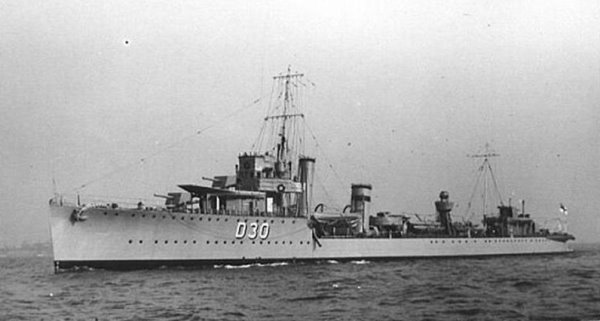 Notable events involving Whirlwind (i) include:

This convoy departed Freetown on 21 September 1939. It was split into several sections at sea at dusk on 7 October 1939 and the ships then proceeded to several ports of arrival in the U.K.

This convoy departed Halifax on 26 November 1939 and the bulk of the convoy arrived at Liverpool on 10 December 1939.

At 0800/28, HMCS Assiniboine and HMCS Skeena parted company with the convoy and set course to return to Halifax.

This troop convoy departed the Clyde on 11 April 1940 for Harstad, Norway. In the end the convoy was split up and one part arrived at Harstad on 15 April. The other part arrived off Namsos on 16 April.

They were escorted by the destroyer HMS Amazon (Lt.Cdr. N.E.G. Roper, RN).

Coming south from a patrol off the Vestfjord area were the battleship HMS Valiant (Capt. H.B. Rawlings, OBE, RN), battlecruiser HMS Repulse (Capt. E.J. Spooner, DSO, RN) and the destroyers HMS Janus (Cdr. J.A.W. Tothill, RN), HMS Javelin (Cdr. A.F. Pugsley, RN) and HMS Juno (Cdr. W.E. Wilson, RN). These ships made rendez-vous with the convoy in the afternoon of the 13th after which HMS Repulse with the three J-class destroyers continued on towards Scapa Flow while HMS Valiant joined the convoy.

On April 14th it was decided that some of the troops were to be sent to Namsos and the convoy split up;

Troopships Chrobry and Empress of Australia escorted by the light cruisers HMS Manchester and HMS Birmingham, AA cruiser HMS Cairo and the destroyers HMS Highlander, HMS Vanoc and HMS Whirlwind split off late in the afternoon. This convoy arrived off Namsos early in the morning of the 16th.

17 Apr 1940
Troopship Chrobry (Polish, 11442 GRT, built 1939) departed Lillesjona for Namsos to land more troops and stores together with the troops that had been put on board the destroyers HMS Afridi (Capt. P.L. Vian, RN), HMS Nubian (Cdr. R.W. Ravenhill, RN), HMS Sikh (Cdr. J.A. Giffard, RN), HMS Matabele (Cdr. G.K. Whitmy-Smith, RN) and HMS Mashona (Cdr. W.H. Selby, RN). The newly arrived AA cruiser HMS Curlew (Capt. B.C.B. Brooke, RN) went in with the Chrobry and the five destroyers while HMS Manchester (Capt. H.A. Packer, RN, flying the flag of Vice Admiral G. Layton, CB, DSO, RN) remained at sea while the other AA cruiser, HMS Cairo (Capt. P.V. McLaughlin, RN), was sent north to Skjel Fjord to fuel. The troopship Empress of Australia (British, 21833 GRT, built 1914) was ordered to return to the U.K. escorted by HMS Birmingham (Capt. A.C.G. Madden, RN) and the destroyers HMS Vanoc (Lt.Cdr. J.G.W. Deneys, RN) and HMS Whirlwind (Lt.Cdr. J.M. Rodgers, RN). HMS Highlander (Cdr. W.A. Dallmeyer, RN) was also initially have to been part of this escort but she had run aground while on A/S patrol off Lillesjona around 0130 hours and had been damaged. She was detached soon after departure for the Tyne where she was to undergo repairs. Shortly before HMS Highlander was detached she forced a German submarine to dive which enabled the convoy to pass unharmed.

At 0200/18 unloading of the Chrobry was halted and she went out to sea again with 170 tons of stores still onboard. She had to clear the area before daylight and the expected air attacks. She was to return the next night. Chrobry indeed succeeded in landing her remaining stores in the evening of the 18th. She then took on board a cargo of timber and set course for the U.K. escorted by HMS Sikh and HMS Mashona. HMS Matabele and HMS Curlew meanwhile had gone back to the U.K. for fuel. HMS Manchester was also on her way back home but was ordered to return to assist a French convoy that was next to land troops at Namsos. HMS Manchester could not be back in time to assist in the landings but course and speed were adjusted so as to meet the convoy at sea and escort it on the return passage. HMS Manchester joined the convoy in the evening of the 20th and remained with it until off the Shetlands the next day after which she was detached and set course for Scapa Flow. HMS Cairo had meanwhile also returned after fueling at Skjel Fjord and assisted the French during the landings. HMS Cairo then returned to the U.K. bolstering the escort of the French convoy. (1)

Some of these ships bombarded Narvik very late in the evening following which the final assault by the Allies on Narvik began.

Narvik was captured from the German in the evening of the 28th.

During the 28th multiple ships sustained damage due to German air attacks;

The most serious damage was to AA cruiser HMS Cairo. She was hit by hit by two bombs at 0620/28 and was badly damaged. One bomb struck abaft B gun. It penetrated the deck and exploded among the supply ammunition party. The other bomb hit the starboard .5" anti-aircraft gun mounting. Twelve of the crew were killed.

Light cruiser HMS Southampton was near missed and damaged by bomb splinters. Her Commanding Officer was wounded and two ratings were killed.

AA cruiser HMS Coventry was also near missed and had one rating killed by bomb splinters.

The destroyers HMS Walker, HMS Whirlwind and HMS Havelock all sustained minor damage from near misses. The most serious damage was to Walker. (2)

Around 1345A/29, the troopship Queen Mary (British, 81235 GRT, built 1936) joined coming from the Clyde escorted by the escort destroyers Atherstone and Fernie which did not join the convoy but returned.

At 0330ZA(-0.5)/30, the destroyers HMS Volunteer and HMS Whirlwind parted company with the convoy to return to Liverpool.

At 1345ZA/30, the destroyers HMS Harvester and HMS Highlander parted company to proceed to Plymouth. HMS Highlander apparently had sustained some weather damage in the heavy seas. The destroyers had been unable to keep up with the convoy at 18 knots without sustaining damage. Therefore they were detached and the convoy increased speed.

The convoy departed Freetown for Capetown in the same composition on 9 July 1940. Escort was still provided by HMS Cumberland.

On the 17th, HMS Cumberland took the Aquitania and Queen Mary from Table Bay to False Bay near Simonstown.

On the 18th HMS Cumberland returned to Table Bay where she picked up the Mauretania. They then proceeded to False Bay where they arrived later the same day.

On 19 July 1940 the three troopships and HMS Cumberland departed False Bay for Ceylon.

Around 0530Z/21, near Durban, HMS Cumberland turned over the escort of the troopships to her sister ship HMS Kent (Capt. D. Young-Jamieson, RN) which then took the convoy to Ceylon.