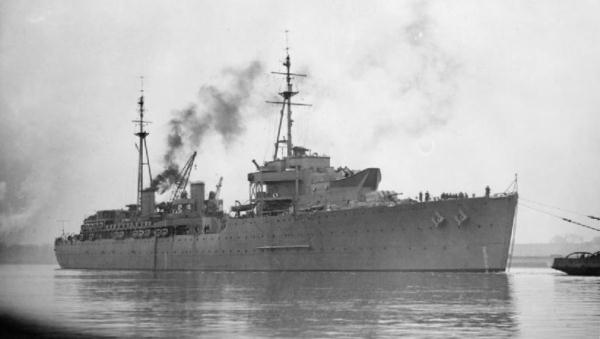 Notable events involving Hecla (i) include:

This convoy was assembled off Oversay on 16 April 1942.

Around 0700N/19, HMS Badsworth and HMS Lauderdale parted company to return to the U.K.

Around 1030N/23, HMS Tetcott rejoined. Both had been delayed in rejoining the convoy due to them having difficulty finding the convoy.

The convoy departed Freetown on 3 May 1942 in the same composition with the addition of the troop transport Rimutaka (British, 16576 GRT, built 1923), transport Agwileon (American, 6678 GRT, built 1907) and the seaplane carrier HMS Albatross (A/Capt. F.W.H. Clarke, RN).

Around 1245Z/4, the corvette HMS Hydrangea (A/Lt.Cdr. J.E. Woolfenden, RNR) joined. The corvette FFS Commandant Detroyant was also to have joined the convoy but failed to do so.

Around 1430Z/4, HMS Wivern and HMS Boreas were detached.

In the morning of 8 May 1942, HMS Frobisher fuelled HMS Tetcott and on completion of doing so parted company with the convoy around 1315Z/8 to escort the Agwileon to Walvis Bay. This ship was detached from the convoy as she was unable to keep up.

In the morning of 9 May 1942, HMS Gambia fuelled HrMs Van Galen however after only 57 tons of fuel had been transferred to hose parted due to the bad weather conditions. These two ships then parted company with the convoy to proceed to St. Helena, which was only 52 nautical miles away, where they were able to complete fuelling (another 155 tons was transferred) while at anchor. HMS Gambia rejoined the convoy around 1550A/10. HrMS Van Galen proceeded independently to Capetown arriving there on 22 May 1942.

Late in the morning of the 14th, HMS Gambia transferred 20 tons of fuel to HMS Tetcott which was running low.

Around 0300B/15, the Capetown section parted company. It was made up of the Dempo, Empress of Canada, Marnix van St. Aldegonde, Nieuw Zeeland, Orbita, Orduna, Phemius, Reina del Pacifico, Rimutaka and Waipawa. HMS Albatross, HMS Tetcott, HMS Southern Gem and HMS Southern Pride went with them. The Capetown section arrived there later the same morning.

The remainder of the convoy continued on to Durban escorted by HMS Gambia.

At 1600B/15, HMS Hecla suffered a heavy explosion on the starboard side. Position was to the south of Cape Aghulas, in 36°06'S, 19°55'E. It was though that she had been torpedoed but this was soon changed to being mined. HMS Gambia stood by the stricken vessel. Later it was found out that also the transport Soudan had also been mined and had been sunk as a result of the damage sustained.

HMS Hecla and HMS Gambia arrived off Simonstown around 0800B/16. HMS Hecla was immediately docked in the Selborne dry dock.

The Durban section of convoy WS 18 was then joined around 1000B/16 by the AA cruiser HMS Carlisle (Capt. D.M.L. Neame, DSO, RN). This ship had been en-route from Durban to Simonstown and had now been ordered to escort the Durban section with HMS Gambia absent.

The Durban section arrived at Durban around noon on the 18th.

On 19 May 1942, the Capetown section of the convoy departed from there. It was now made up of the Bulkoil (American (tanker), 8071 GRT, built 1942), Dempo, Empress of Canada, Marnix van St. Aldegonde, Nieuw Zeeland, Orbita, Orduna, Phemius, Reina del Pacifico and Waipawa. HMS Albatross was also with the convoy which was escorted by HMS Frobisher. The Phemus however had to return to Capetown later the same day.

On 23 May 1942, the Durban section of the convoy departed from there. It was made up of the Capetown Castle, City of Capetown, Clan Lamont (British, 7250 GRT, built 1935), Empire Woodlark (British, 7793 GRT, built 1913) and Llandaff Castle. They were escorted by the battleship HMS Resolution (Capt. A.R. Halfhide, CBE, RN).

The two sections then merged, but the Reina del Pacifico was detached to proceed independently to Bombay arriving there on 2 June.

Around 0615C/27, the Phemus rejoined the convoy after having returned to Capetown on the 19th.

Around 2300C/27, the Llandaff Castle parted company with the convoy to proceed to Diego Suarez. HMS Frobisher went with her as escort. They arrived there around 2000C/29.

Around 1530D/2, HMS Worcestershire parted company taking the Bulkoil, Phemius and Waipawa with her to Aden where they arrived around 0900C/4.

The remainder of the convoy continued on towards Bombay escorted by HMS Enterprise. It arrived at Bombay around 1100FG/7. (1)

This convoy departed Capetown on 20 October 1942.

Off Capetown the convoy was joined by the destroyer depot ship HMS Hecla (A/Cdr. J.R. D'Oyly, RN) which came from Simonstown.

Around 0905B/27, HMS Arrow parted company with the convoy to proceed to Pointe Noire to fuel.

Around 1000B/27, HMS Active parted company with the convoy to proceed to Pointe Noire to fuel.

Around 1800B/28, HMS Arrow and HMS Active rejoined the convoy from Pointe Noire.

The convoy arrived at Freetown on 2 November 1942.

This convoy departed Freetown on 4 November 1942.

Around 1235Z/9, HMS Hecla and HMS Vindictive parted company with the convoy to proceed to Gibraltar escorted by HMS Marne and HMS Venomous.

Around 0945N/12, HMS Arrow and HMS Active rejoined the convoy. HMS Bridgewater then parted company to proceed to Ponta Delgada, Azores to fuel and then return to Freetown.

The convoy arrived at Liverpool on 17 November 1942 escorted by HMS Arrow and HMS Active.

The Highland Brigade had been detached on the 16th to Belfast and HMS Shropshire, HMS Duncan and HMS Anthony had proceed to the Clyde also arriving on the 16th.

12 Nov 1942
At 00.15 hours on 12 November 1942 German U-boat U-515 fired a spread of four torpedoes at the British destroyer tender HMS Hecla which was misidentified as a Birmingham class light cruiser and hit her in the engine room. Two torpedoes were surface-runners and the last also malfunctioned and was a circle-runner. The U-boat then hit the ship with three coups de gr?ce at 01.28, 01.49 and 02.06 hours, sinking the vessel. At 02.11 hours, U-515 fired two torpedoes and badly damaged the escorting HMS Marne (Lt.Cdr. H.N.A. Richardson, DSO, DSC, RN)