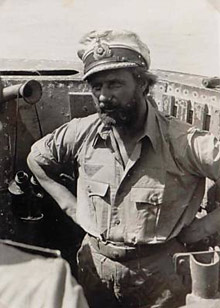 The two U-Boats that surrendered from sea in Canada were:

Of these, U-889 was moved to Halifax, Nova Scotia on 15 May but, after early trials with the Royal Canadian Navy, it was then transferred to the USA on 10 January 1946, arriving at the Portsmouth Navy Yard on 11 January. However, whereas when U-889 was inspected by the Tripartite Naval Board in September 1945, it was found to be fully “operable”, it was in a non-operational condition when transferred to the USN.

The other U-Boat that surrendered in Canada (U-190) was formally allocated by the Tripartite Naval Commission to the UK as one of its 10 retained U-Boats, but the UK immediately gifted it back to Canada in recognition of the part played by the Royal Canadian Navy in the Battle of the Atlantic, thus accounting for a certain amount of subsequent confusion as to why U-190 remained in Canada after the war.

U-190, which was moved to Halifax on 25 May, remained in Canada with the RCN, and its first task in summer 1945 was to undertake a publicity tour of the ports and communities along the St Lawrence River and in the Gulf of St Lawrence. Thereafter, operating out of Halifax, it was used by the RCN for anti-submarine training.

The RCN took U-190 out of service on 24 July 1947, and on 21 October 1947 (Trafalgar Day) it was towed to the very spot where, on 16 April 1945, it had torpedoed and sunk the minesweeper HMCS Esquimalt. The ceremonial sinking was designed as a publicity event involving a joint air and sea assault. However, a rocket from the very first airborne attack hit U-190, and it sank less than 20 minutes after the start of the operation, and before the surface forces could get involved.

The two U-Boats that surrendered from sea in Argentina were:

These two U-Boats had chosen to “escape” to Argentina rather than obey the Allied surrender instructions, and the crews were therefore surprised when they and their U-Boats were handed over to the US authorities as soon as they arrived in Mar del Plata. In the case of U-977, 16 married members of the crew had decided that they did not wish to go to Argentina, and they were therefore landed on 10 May near Bergen, Norway, before the U-Boat started its long transit south.

Both U-Boats were subsequently transferred to the USA. U-977 was taken over by a US Navy crew in Mar del Plata in September 1945 and, after having to repair the engines whilst at sea, it arrived at the US Navy Yard in Boston on 13 November. It was then moved to the Groton Submarine Base at New London from where, between then and 8 December, it took part in 3-week a publicity tour of US east coast ports in company with the destroyer USS Baker, before being sailed to the Portsmouth Navy Yard.

On 28 July 1945 U-530 was towed from Mar del Plata to the Rio Santiago Naval Base at Ensenada, near Buenos Aires, arriving on 29 July. It was then towed, with a US Navy crew on board, to the US Navy Yard at Boston. In November, it took part in a victory tour of various US ports in Texas and the Gulf of Mexico. It travelled on the surface throughout the tour, and was escorted by the destroyer USS Thomas, visiting Port Arthur in Texas on 11 November.

The five U-Boats that surrendered from sea in the USA were:

It had originally been intended that surrendering U-Boats should be taken to one of the US Navy Bases at Casco Bay in northern Maine, however poor weather including fog, as well as the threat of encountering icebergs, led to a change of plan and the decision to use the US Navy Yard at Portsmouth instead.

Additionally, two of the U-Boats that had been transferred from Norwegian and German ports by the Royal Navy to Lisahally in Lough Foyle, N. Ireland in Operation Pledge to await decisions about their final disposal, were handed over to the US Navy at the end of July, and then transferred to the USA in August.

These were U-2513, which had surrendered on 9 May in Horten, Norway, and U-3008, which had surrendered from sea in Kiel, Germany on 21 May. They were taken over by the USN on 30 July, and sailed for the USA on 6 August. The Atlantic crossing was made on the surface, and in company with a US Navy tug. On 16 August both U-Boats diverted into the Argentia US Naval Base in Newfoundland, Canada. U-3008 for rudder repairs and U-2513 to land two sick crewmen. On 20 August they departed Argentia, and arrived at the US Navy Submarine Base at Groton, New London on 22 August. After that, they were moved from Groton to the Portsmouth Navy Yard, with U-2513 arriving on 5 September, and U-3008 on 14 September.

Also, U-1406, which was a Type XVIIB hydrogen peroxide-powered U-Boat which had surrendered in Cuxhaven on 5 May and then, in contravention of the Surrender Agreement, been scuttled in Cuxhaven harbour on 7 May. It was raised on 1 July and towed via the Kiel Canal from Brunsbuttel to the Howaldt-Werke shipyard in Kiel. On 14 September it was loaded onto the US freighter Shoemaker and transported to the Portsmouth Navy Yard as deck cargo, arriving there on 11 October 1945.

The 1945 Potsdam Agreement, which included the requirement to allocate 10 U-Boats to each of the 3 Allies (USA, UK and USSR), led to the creation of the Tripartite Naval Commission, which was charged with determining exactly which U-Boats would be allocated to each country. Thus, members of the Tripartite Naval Board for the Western Hemisphere visited the USA, Canada and the Caribbean in August, September and October 1945 to inspect the surrendered U-Boats.

The Tripartite Board's Report dated 25 September records that they inspected nine of the U-Boats held in the USA and Canada (but this did not include either U-505 or U-1406). Their conclusion was that only one of the U-Boats (U-889) was deemed to be “operable”, both on the surface and submerged, and that of the other eight, U-190, U-234, U-858 and U-873 would require one month to complete repairs, U-2513 and U-3008 would require two months to complete repairs, and that the remaining two (U-806 and U-1228) would require three months to complete repairs. At that time the Board was unable to report on the condition of U-530 and U-977 as these were still in transit from Argentina, and it was expected that reports on their condition would not be available until mid-October after they had been inspected in Trinidad on 3 October during their transit from Buenos Aires to the USA.

The result of this Tripartite review, as well as a similar one that took place in the UK at the same time, was that U-234, U-530, U-858, U-873, U-889, U-977, U-1105, U-1406, U-2513 and U-3008 were formally allocated to the US Navy. Eight of them were already in the possession of the US Navy, and U-889 was to be transferred from Canada. Thus, only one more U-Boat needed to be moved across the Atlantic. This was U-1105, which had surrendered from sea on 10 May in Loch Eriboll, and then been moved via Loch Alsh to Lisahally, before being transferred to the UK Royal Navy Submarine Base at Gosport on the south coast of England on 5 August. It was handed over to the US Navy on 15 December, left Gosport on 19 December, and arrived at the US Navy Yard in Portsmouth on 2 January 1946.

The two U-Boats in the poorest condition (U-805 and U-1228) were therefore declared to be surplus to requirements and, as a result and in accordance with the Tripartite disposal agreement that all unallocated U-Boats that had surrendered were to be sunk not later than 15 February 1946, they were scuttled by the USN off Cape Cod (U-805 on 8 February and U-1228 on 5 February), but not before they had first been stripped of parts for the repair of the other type VIIC U-Boats which were retained by the USA.

The U-Boat that had been captured was U-505, which had been forced to the surface on 4 June 1944 by a US Navy escort carrier task group 150 miles off the west coast of Africa. U-505 was then towed - with a US Navy crew - first by the carrier USS Guadalcanal, and then by the USN tug Abnaki, 2,500 miles to US Port Royal Bay Navy Base in Bermuda for technical examination. U-505 was kept in Bermuda for the remainder of the war and, because of the security imperative to maintain the illusion that it had been sunk rather than captured, it was temporarily renamed as USS Nemo.

After the war, U-505 was moved to the US Navy Yard at Portsmouth, arriving there on 24 September 1945. It was originally proposed that U-505 should be used for gunnery and torpedo target practice. However this proposed fate came to the attention of Admiral Gallery (who had commanded USS Guadalcanal when U-505 was captured), and through his initiative the U-Boat was eventually donated by the US Government to the Chicago Museum, being dedicated as a permanent exhibit and war memorial on 25 September 1955 - where it remains to this day.

Therefore, of the 14 U-Boats in the USA and Canada on 1 February 1946, one (U-505) was exempt from consideration by the Tripartite Naval Commission, one (U-190) was allocated to the UK (and then re-allocated to Canada), two (U-805 and U-1228) were earmarked for immediate sinking, and 10 were formally allocated to the USA (including U-1406, the two U-Boats that had surrendered in Argentina, and the three that had been transferred from the UK).

Finally, these 10 U-Boats which had been allocated to the USA, and which had then been used for a variety of purposes by the US Navy in the late 1940s, were disposed of as follows: