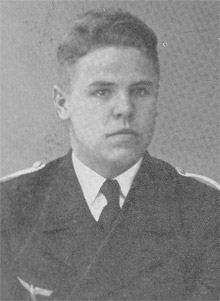 19 Aug 1944
En route to the St. Lawrence River at night, the boat was ambushed by the USS Bogue hunter-killer group, and three depth charges from one of the aircraft caused minor damage (Sources: Blair, vol 2, page 622)

You can listen to the second and last commander of U-802, Helmut Schmoeckel, speak of his late-war experiences on our Commander Interviews pages.

11 Apr 1944
An accident required the amputation of a man's finger.