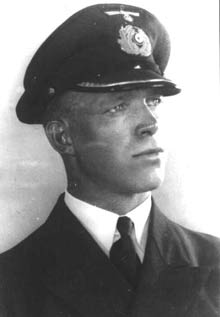 
U-74 and the Bismarck tragedy

On May 24, 1941 the German battleship Bismarck and the heavy cruiser Prinz Eugen sank the battle cruiser HMS Hood, the pride of the Royal Navy, and heavily damaged the accompanying battleship Prince of Wales that had just been completed. The Bismarck took a hit in the bow, that reduced her maximum speed, so that later Prinz Eugen had to be dismissed and proceeded further on to the south, the Bismarck adopted a course back to Brest, France.

Meanwhile the Royal Navy tried to catch the fugitive Bismarck with all their might. But luck seemed to favour the Germans, because the contact with Bismarck broke off and the British forces searched in the wrong direction, assuming the Bismarck together with the Prinz Eugen. But then a British PBY spied Bismarck heading to Brest, around 600 miles off the French coast. The last chance for the Royal Navy was Task Force H sprinting north from Gibraltar to the latest known position of the Bismarck. The Bismarck nearly escaped but a lucky torpedo from the carrier HMS Ark Royal hit the stern and destroyed the rudders and damaged the propellers, which gave the other forces, that were slowly running out of fuel, the possibility to close in.

At dawn on May 27, 1941 the crippled Bismarck was taken under fire by the battleships Rodney and King George V and the cruisers Norfolk and Dorsetshire and finally her crew scuttled her at 10.36 am. Earlier Flottenchef Admiral Lütjens requested an U-boat to recover the logbook. The other subs Lütjens called after the sinking of Hood to lead the following British forces into a trap hadn't been successful. Only U-556 had the whole Task Force H in its Sehrohr, the battleship Renown and the carrier Ark Royal that had started the fatal attack on Bismarck, but U-556 did not have a single torpedo left in its tubes; all had been used up in a convoy battle.

Also U-74, Kapitänleutnant Kentrat, had the order to attack the British forces in this area. In the evening Kentrat dived in order to listen and they detected another U-boat. Kentrat returned to the surface and a mere hundred meters a bow of a German sub appeared out of the stormy sea.

Left: Kptlt Herbert Wohlfarth of U-556

It turned out to be U-556, Kapitänleutnant Wohlfarth. After some communication problems, using a megaphone in this heavy weather, Wohlfarth passed on to Kentrat the order to get Bismarck's log, because he was short of fuel and had to return to his base. Wohlfarth had hardly disappeared, when an aircraft sighting forced U-74 to crash dive, but the crew later assumed that it was a German Fw-200 Condor.

At 10.36 am the sonar crew heard sinking sounds but they weren't certain whether it was Bismarck or a British ship. Detonations were also audible. Later U-74 went to periscope depth and Kentrat saw battleships and cruisers directly in front of him. He tried to get into an attack position but the weather was too bad, the seas too high to remain on periscope depth or to shoot a torpedo. But then there was the wreckage and sometimes yellow life-vests visible.

After the disappearance of the British ships Kentrat surfaced. The picture he saw was a cruel one. Everywhere he looked he saw dead bodies hanging their heads down in their live-vests and tons of wreckage. They searched the whole day but they didn't find anybody alive. The day was near its end when they finally discovered a yellow raft in which three sailors, Georg Herzog, Otto Höntzsch and Herbert Manthey, struggled for life. The three jumped into the roaring sea to drift to the submarine. All three, one of them a non-swimmer, were happily rescued, but then an aircraft alert forced the crew to hurry up and the partially unconscious survivors were nearly thrown through the hatch and the U-boat submerged.

U-74 cruised another day but everybody they found was dead and then it got the order to return immediately to Lorient. On its way back, the three rescued men slowly recovered from the shock of the disaster and they could give first statements of the end of the Bismarck and their own fate, which were promptly written down by a crew member. At the end of the battle the three and some others used turret D as a protection shield against the incoming projectiles and tried to float some of the rescue rafts but a close impact washed most of the rafts and the people away but they managed to get another ready and jumped into the sea after the last turret ceased fire. With them was a war correspondent with all of his film records but after the raft capsized were first the films gone and later the war correspondent. Around noon a Condor passed by but they weren't seen. In the evening they nearly gave up hope because there wasn't anything to eat in the raft, then U-74 suddenly appeared.

Half way back extreme manoeuvres commands went through the boat; the IWO stumbled upon an incoming torpedo and barely managed to escape. Shortly after that they saw the British submarine that had launched the attack and vanished into the dark. Arriving in Lorient the survivors were met by a delegation of Group West and instantly taken to Paris.