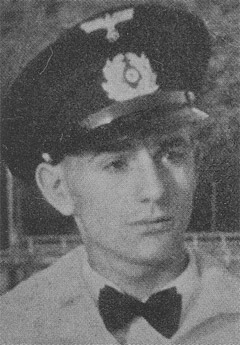 For the first ten years of his naval career, Otto von Bülow served on the large warships Deutschland and Schleswig-Holstein, and in several navy anti-aircraft units. In April 1940 he joined the U-boat arm and seven months later took command of the school boat U-3 in the 21st (Training) Flotilla.

After the usual Baubelehrung, in August 1941 Bülow commissioned U-404 at Danzig. In January 1942 the boat left Kiel on her first war patrol. In the course of the next five patrols Bülow sank 14 ships, including the British destroyer HMS Veteran (1,120 tons).

On April 23 1943 Bülow attacked an Allied escort carrier with two FAT and two G7e torpedoes. The four torpedoes were directed at the HMS Biter, but von Bülow thought he was attacking the USS Ranger.

Upon hearing four explosions (probably the torpedoes dead end course), he considered them as hits, and transmitted the BdU the message "Ranger possible"; the answer was to confirm it (whether in his opinion he had sunk the carrier). Von Bülow answered with a "sinking assumed". The importance of this was that he received the Oak Leaves to this presumed sinking.

It was announced in The German Press, and Hitler himself awarded the Knights Cross with Oak Leaves to von Bülow when the commander of U-404 returned home. The Americans reacted blaming the German commander as a coward, but it is well known that he really believed he had sunk the carrier, and for the rest had an excellent service record witnessing his bravery.

Later, when the truth was available for the Germans, their records were changed, and the attack correctly reported as being against the Biter. Bülow left the boat after this patrol.

In September 1943, Korvkpt. Bülow founded the 23rd Flotilla in Danzig, where future U-boat commanders got their first training. When he commissioned U-2545 in the spring of 1945 he was one of the highly decorated U-boat commanders (including Schnee, Cremer, Emmermann, Witt and Topp), who took command of the new Electro U-boats (type type XXI Elektro U-boat and the smaller type XXIII Elektro U-boat) in an attempt to turn the tide in the battle of the Atlantic.

In last weeks of war Bülow commanded the Marinesturmbataillon I (Naval Assault Battalion I). After the war he spent three months in British captivity. In July 1956 he joined the newly formed German navy (Bundesmarine). In 1960 at Charleston, South Carolina he commissioned the destroyer Z-6, the former US destroyer USS Charles Ausburne. In March 1963 he became commander of the 3. Zerstörer- geschwader (3rd Destroyer Squadron). Before he retired in 1970, he spent his last five years as Kapitän zur See and garrison chief of Hamburg.