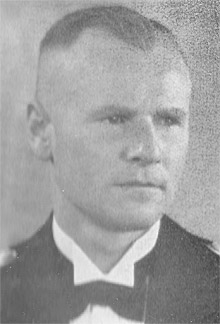 After the Norwegian campaign he returned to Germany, joining the U-boat arm in July 1940. His first command was U-6, a type IIA "duck" coastal boat, but he commissioned the type VIIC U-597 in Nov 1941. He went down with her when she was sunk with all hands by an RAF Liberator in Oct 1942.

He chose an edelweiss for the conning tower emblem on his boat, recalling childhood stays in the Bavarian Alps.