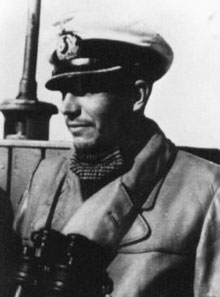 Kapitänleutnant Georg von Wilamowitz-Möllendorf became one of the oldest U-boat commanders of WWII to see active service when he sailed from Helgoland, Germany on 29 March 1942. He was 48 years old at the time. He was to take the type XIV milch cow U-459 on five more patrols and shoot down three Allied aircraft before being forced to scuttle her on 29 July 1943.

After shooting one attacker down and being left with 18 dead, disabled steering, no AA guns and leaks astern, a second air attack left the boat helpless. Wilamowitz-Möllendorf ordered his men to abandon ship and saluted them as they rowed away, then went below to open the scuttling vents. He went down with his boat.

41 U-boat crew and a British airman they had taken prisoner were rescued by the Polish destroyer Orkan some 7 hours later.