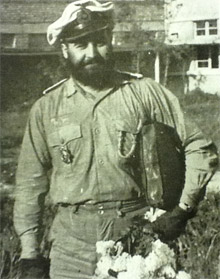 Udo Heilmann joined the German Navy (Reichsmarine) in 1933. He served as First Watch Officer on the small "duck" U-18 for over 2 years, from June 1937 to Oct 1939. He was thus one of the U-boat officers with extensive pre-war experience.

From Aug to Sept 1940 Udo Heilman went through U-boat familiarization (Baubelehrung) before taking command of the larger type VIIC U-97 on 28 Sept. For the next year and a half he commanded the boat on 9 patrols and sank 10 merchants, one auxiliary warship and damaged a large merchant.

He joined the 26th (Training) Flotilla as torpedo attack instructor in June 1942 until March 1943 when he served as an adviser to FdU/Trg until the end of the war.