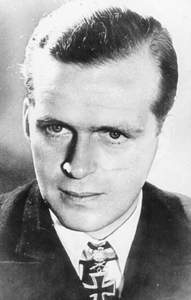 Rudolf Ites joined the Kriegsmarine in 1936. From Aug 1939 to June 1942 he served in various staff positions. He went through Helmsman’s school from June to Sept 1942 when he began his U-boat training, finishing the courses in March 1943.

He served as the 2nd Watch Officer (2WO) on U-709 from March to July 1943, when he was promoted to 1st Watch Officer (1WO). Rudolf Ites went through U-boat Commander training with the 3rd ULD and the 24th (Training) Flotilla from Nov to Dec 1943.

Ites left base at Lorient, France for his first patrol as Commander on 25 Jan 1944. On 22 Feb U-709 was ordered to join the 31 boat strong Wolfpack Preussen (Prussia). She would be one of eight boats to be lost from that group.