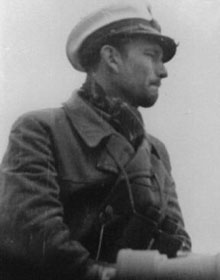 Oblt. Harald Lange was brought onto the troubled U-505 in an attempt to restore the morale of the crew after the disappointing command of Kptlt. Peter Zschech and his suicide on board on 24 Oct 1943. Dönitz chose well as Lange at 40 years old one of the oldest U-boat commanders of WWII. He managed to bring the troubled boat again into proper fighting condition.

When the boat was attacked by the USS Guadalcanal hunter-killer group on 4 June 1944 the boat was in a very bad position, low on electricity and the odds were very much against her. Lange did well in saving all but one of his crew – although the capture of the boat was not ideal of course.