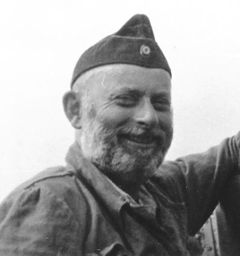 Ludwig Mathes joined the Reichsmarine in 1928. He belonged to Crew 28, and among his classmates were men like Werner Harteinstein (U-156), Eitel-Friedrich Kentrat (U-74) and Karl Thurmann (U-553).

After U-boat construction familiarization (Baubelehrung) at Bremen he commissioned the much larger type IX U-boat U-44 on 4 Nov 1939 and put her through her trials in the Baltic with the 6th Flotilla. On 6 Jan 1940 he left Wilhelmshaven for his first war patrol.

When Kptlt. Ludwig Mathes returned to base in Feb 1940 he had completed the 5th most successful patrol of the war so far. He was highly praised by Dönitz and was told to have "perfectly executed" his mission (Blair, 1996).

He was lost at the start of his second patrol when U-44 hit a British mine on or around 13 March 1940, along with his entire crew (47). After his death Kptlt Mathes was promoted to Korvettenkapitän, effective from 1 March 1940, making him one of the first of Crew 28 to reach that rank.