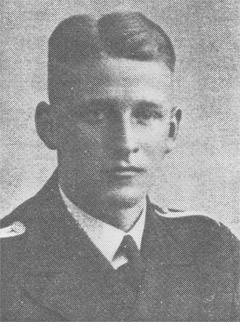 Thilo Bode joined the Kriegsmarine in 1936, and was part of the Olympia Crew. He served in the Spanish Civil War, and spent two years on the destroyer Z 6 Theodor Riedel before joining the U-boat force in 1942.

Following U-boat familiarization (Baubelehrung), Kptlt. Bode commissioned the large type IXC/40 U-boat U-858 at Bremen on 30 Sept 1943. He took her on two patrols, one of 108 days in the North Atlantic, and one of 68 days off the US East coast. At the end of the second patrol he surrendered his boat to the US Navy at Cape May, New Jersey on 14 May 1945.