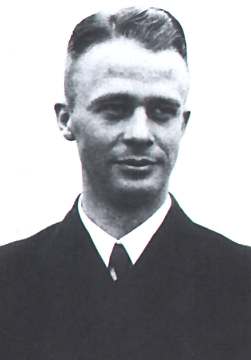 
Kurt Dobratz began his naval career in March 1922. After over ten years sea time on the cruisers Hamburg and Leipzig and the battleships Schleswig-Holstein and Hannover, he was transferred to the Luftwaffe on September 1935. During the next eight years he served in several staff positions, but also commanded combat units, flying 11 combat sorties in 1941.

In April 1943 he rejoined the Kriegsmarine to undergo eight months of training before commissioning the type IXC/40 U-1232 in March 1944.

In November 1944 he sailed from Horten, Norway on his first and only patrol, one of the most successful in the final year of the war. In January 1945 he sank four ships in Canadian waters with a total of 24,531 tons.

One of the oldest commanders
At 40, Kapitän zur See Dobratz was one of the oldest U-boat commanders of WWII to see active service when he took U-1232 out from Horten on 10 Nov 1944. The patrol lasted 97 days. It may be that his time in the Luftwaffe stood him in good stead while on patrol. His unusual success and survival rate for this stage of the war is shared by other U-boat commanders with aviation experience (Hardegen, Hechler, Thomsen).

After returning to base in February 1945 he left U-1232 to became chief of staff at Bdu. He was the last Kommandierender Admiral der U-Boote (Admiral of U-boats) during the final days of the war. He then spent nine months in captivity. When he returned to Germany he studied law, eventually earning a doctorate. 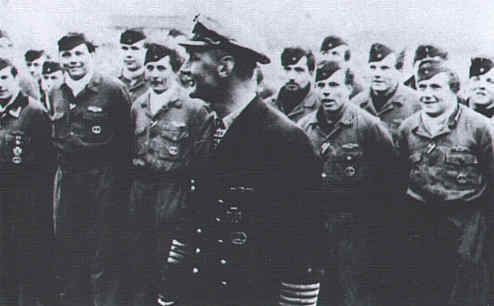 (Taken only ten weeks before Germany's capitulation, the cheerful faces of the men in this photograph speak volumes for the morale of the U-bootwaffe.)