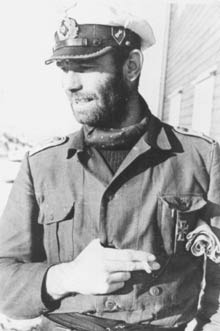 Oskar Kusch joined the Kriegsmarine as an officer candidate in 1937 and was inducted into Crew 1937a. Other members of his Crew went on to have distinguished naval careers, among them U-boat Aces Forstner, Lange, Koitschka and Marbach.

His early naval career was unexceptional: from being transferred to the U-boat arm in 1940, he served on U-103 until 1943 before taking over command of the long-range type IXC U-boat U-154.

He took U-154 on two patrols in the South Atlantic, sinking three large vessels totalling over 23,000 tons, and was by all accounts a capable and efficient officer: handsome, athletic, intelligent and popular with his men, direct sometimes to the point of outspokenness. 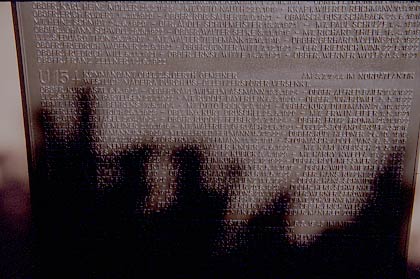 Memorial plaque at Möltenort listing the men lost when U-154 was sunk, 3 July 1944

On January 26 1944, Oblt. z.S. Oskar Kusch was condemned to death by court martial, following a denouncement for alleged "Wehrkraftzersetzung" (sedition and defeatism) made by his former IWO Dr. Ulrich Abel. Abel had been discontented at Kusch rating him unfit to command his own boat after his first patrol on U-154, and although Kusch's report after a second patrol classed him as fit for command, Abel was enraged by being described in it as "inflexible and rigid" and of only average ability. Abel had turned the other officers on U-154 against Kusch after receiving the first report, and since he held a doctorate in law, was well aware that the accusation he made could very likely result in a death sentence.

One of eleven politically motivated accusations against Kusch was that he had ordered a photograph of Hitler removed from U-154's wardroom to a less conspicuous location, commenting that "We are not in the business here of practising idolatry."

At his trial his officers took the stand against him. His defence team pointed to his successful career and record of honourable service, and claimed that he only stated his opinions to his officers to provoke debate and to raise awareness of current affairs and Germany's situation.

He was also sentenced to one year in prison for "listening to foreign radio stations". He was given a chance to ask for clemency, but he chose to stand by his convictions and morals and admit no wrongdoing. He was also found to have had "liberal tendencies" by choosing to leave the almost-mandatory Hitler Youth at the age of 17 (a few months after being forced to join when the non-Nazi youth group he was a member of was dissolved).
One of the officers empanelled at the court martial was Oblt. Otto Westphalen, a fellow U-boat commander.

Oskar Kusch was executed by firing squad on 12 May 1944 in Kiel-Holtenau. 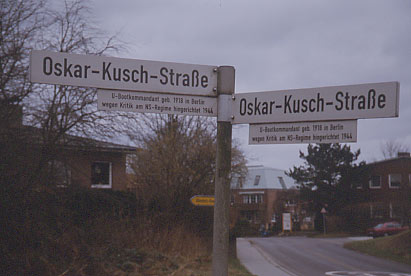 His father sought justice for his son under new Allied laws in May 1946, and in 1949 the judge who sentenced him, Karl-Heinrich Hagemann, was tried for "Crime against civil rights". The case dragged on until late 1950 when Hagemann was found to have acted within the law at the time - for many a controversial verdict.

In 1996 Kusch's name was finally cleared, and in 1998 the City of Kiel erected a memorial and renamed a street in his honour not far from the firing range on the Kiel Canal where he had been shot 54 years before.

The text of the plaque on Kusch's granite memorial on Oskar-Kusch-Street in Kiel-Holtenau reads as follows:

Special thanks to Tim Schwabedissen and Eric C. Rust.

Those who tried to help Kusch and those who did nothing

Among those who came to Kusch's defence were KrvKpt. Werner Winter, Kptlt. Gustav-Adolf Janssen (his former commanders on U-103), and Kptlt. Wilhelm Franken. After the war FrgKpt. Erich Topp tried hard to get Kusch rehabilitated, but met with resistance from other former U-boat men such as Kpt. Karl-Friedrich Merten and Kpt. Hans Rudolf Rösing (Blair, 1998).

Most disappointing to many was that neither Dönitz, Friedeburg nor Godt from U-boat high command did anything to help - or even met Kusch during the court martial (Blair, 1998). They could have stopped the affair before it reached trial or mitigated events (as they did when Henke was targeted by the Gestapo).

(Dr. Abel died three weeks before Kusch, when his first command, U-193, was sunk on its first patrol.)