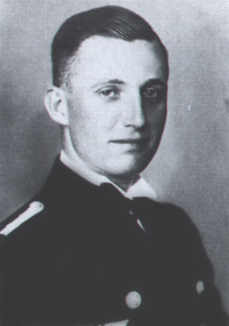 For more than a year Georg Lassen was I WO on the very successful U-29 under Kptlt. Otto Schuhart. They sank 12 ships with a total of 80,688 tons as well as the aircraft carrier HMS Courageous. From January to September 1941, Kptlt. Lassen was the commander of U-29, which at this time was a training boat in the 24th (Training) Flotilla U-boat flotilla.

On 16 October 1941 Lassen commissioned the type IXC U-boat U-160, and on his first patrol as commander in March/April 1942 he sank or damaged six ships with a total of 43,560 tons. Also outstanding was his last patrol, in South African waters, where on 3/4 March, 1943 he sank or damaged six ships in less than five hours with a total of 41,076 tons. Three days later he received the Oak Leaves to his Knights Cross.

On 9 March, 1943 the daily Wehrmachtsbericht announced:

Georg Lassen then became a tactics instructor and the chief of the "Offiziers-kompanie" in the 1st ULD (U-Boot-Lehrdivision, training division).

Georg Lassen died at Calviá, Mallorca, Spain on 18 Jan 2012 after an illness. He was 96 years old. His ashes were scattered in Santa Ponça Bay, with the ashes of his wife.