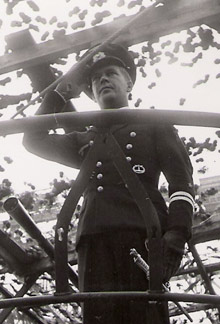 
Waldemar Mehl joined the Reichsmarine in April 1933. Before the war he served on the light cruisers Köln and Nürnberg and the battleship Schleswig-Holstein. From December 1939 he served in several positions ashore before transferring to the U-boat force in April 1941.

Following standard training he spent a few months as a Kommandantenschüler (prospective commanding officer) on U-371 before taking over command of U-62, then U-72.

In May 1942 he returned to U-371 to command her on 13 successful patrols in the Mediterranean over the next two years, sinking, among other vessels, three Allied warships.

He left U-371 in April 1944 to join the FdU Mittelmeer (U-Boat Command Mediterranean) staff, and also held two other staff positions. After the war he served in a minesweeper unit for three months.