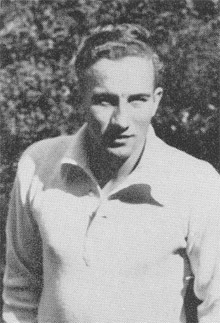 Some prisoners with spare time pursued personal hobbies or made handicrafts on their own, Officers, in particular, were fond of gardening, and what they did not grow, they purchased in town. At the Mexia internment camp, for instance, German officers were permitted to order flowers from local florists, which they did to the tune of 50 dollars a day, and kept their quarters filled with them. Other POWs built walnut furniture. Some painted murals on the walls of the theater, mess halls, and hospitals. A few prisoners in each camp spent their time locating and visiting with relatives, usually long-time naturalized American citizens.

At Camp Grant, Illinois, a group of talented artists painted oil portraits of such German figures as Frederick the Great, Field Marshal Rommel, Bismarck, and Hindenburg, which they sold to a steady stream of appreciative guards and souvenir-hungry townspeople.

At Camp Carson, Colorado, the prisoners recreated a bit of the Fatherland by building an authentic beer garden for use during their off-hours. The beer garden was complete with chairs, tables, and decorations made in the camp woodcraft shop. With the new beer garden, indoor and outdoor sports, woodworking shop, theater, school classes ranging from grade school to college, camp newspaper (Die P W Volke), and the stage plays written and produced by the prisoners, Camp Carson's commander, Lieutenant Colonel Eugene N. Frakes, was able to report: "Morale in the camp is unbelievably high." Little wonder.

At Camp Hearne, Texas, the Germans painstakingly constructed concrete replicas of old German castles-waist high-down to the detailed turrets and moats, and a curious visitor to the old camp site can still examine a medieval little schloss rising just above the weedtops in a corner of the empty landscape where the camp used to be.

On very rare occasions, and usually as the result of a camp visit by a representative of the American Red Cross, YMCA, or local charity, the prisoners would rally to a charitable cause with admirable enthusiasm. On February 27, 1945, for example, a group of Germans at Camp Campbell, Kentucky, contributed $3,800 to the American Red Cross, money which the men had saved from their 80 cents per day canteen coupons and which was converted to currency by the War Department to honor the prisoners' gesture.

German prisoners at Eglin Field, Florida, outraged at their government after viewing a series of atrocity films, were moved to contribute the substantial sum of $2,371 to American war charities. At the tiny branch camp of Marked Tree, Arkansas, the entire population of 120 Austrian-born prisoners celebrated the fall of Vienna to Allied forces by the spontaneous donation of $176 to the American Red Cross. Such projects occurred from time to time in about 10 percent of the POW camps.

Finally, on rare occasions, a prisoner might be allowed to occupy himself with interests outside of the camp. German officers with good camp records were eligible, at the discretion of the camp commander, to be placed on limited parole. The officer was placed on his word of honor not to escape or wander more than five miles from the camp, and was to be accompanied by an unarmed American officer. Usually such paroled German officers simply spent a Sunday walking through the woods, or birdwatching in the early morning hours. One surprising exception, recounted by author John Moore, concerned five hardened submarine officers who were evidently allowed to travel to their new homes at Camp Blanding, Florida, pretty much on their own. They spent the several days on the train dressed in American uniforms, with small Nazi lapel pins, chatting amiably with fellow passengers, who had little idea that the men were prisoners of war on parole.

Not all of the projects which occupied the prisoners were strictly legal, and in every prisoner of war community, dozens of minor schemes were hatched weekly. Some men spent their spare time accumulating hard currency in the event of escape, and these men seldom passed up an opportunity to cajole small change from the guards and sell handcrafted souvenirs to local townspeople.

Reinhold Pabel was one of the few inmates whose preoccupation with currency led to his successful escape from Camp Grant, Illinois. In his search for money, Pabel recalls that

Mac [one of the guards] was quite anxious to obtain a souvenir made by prisoners. One day I somehow managed to secure a neatly done wood carving and showed it to Mac. His eyes lit up instantly and he asked eagerly:

'What do you want for it?

He eyed me suspiciously:

'What do you want the cash for? You can't spend it anyhow. And it is against orders, you know' . . .

I argued: 'Look at it this way, Mac. I assume you want this genuine POW-made carving as a souvenir, right?

'O.K. And I want a five-dollar bill as a souvenir, so I shall be able to show my grandchildren something to prove that I really was in America once. In other words: souvenir for souvenir. Fair enough?

That the government's policy regarding currency inside the camp was wellfounded is borne out by Pabel's eventual escape, his disappearance into the mainstream of life in Chicago, and the F.B.I. manhunt, which did not end until his capture and deportation in 1953!

There was no end to the number of clandestine preoccupations which took place in the POW communities. Some men collected cigarettes, the universal currency of army camps, prisons, and closed institutions the world over; others tried to counterfeit canteen coupons; and still others devised political plots-to be discussed in detail in a later chapter-ranging from efforts to make radio contact with the Fatherland, through the secret publication of anti-Semitic flyers, to the establishment of kangaroo courts and "death committees."

One of the more harmless and most popular pastimes, however, concerned alcohol. Many camps, at the discretion of the Service Forces commanding officer and the camp commander, made light wine and 3.2 "near-beer" available to the inmates, though on a tightly rationed basis, and with a close eye on public opinion. When public opinion periodically rose to protest the "coddling" of the prisoners of war causing the end to the sale of beer, POWs across the country rose to meet the challenge by making whiskey. Making whiskey required a bit of planning and patience. First the Germans collected oranges, apples, potatoes, and the raisins that they had picked out of the raisin bread at breakfast. To this they added their hoarded sugar rations. Then they added yeast, which they obtained from the prison baker in exchange for packs of cigarettes. POW John Schroer at Camp Rucker recalls: "From the size of the bread on the breakfast table each morning, I could tell if the yeast content was low; if it was," he laughs, "I knew that somewhere in camp a large batch of whiskey was being processed." These ingredients were combined, and the mixture was allowed to ferment in the sun. The results, according to a number of former prisoners, were potent and sometimes even palatable. Despite the efforts of the American guards to locate the contraband moonshine in monthly sweeps through the barracks, the alcohol often went undiscovered until raucous laughter and slurred singing brought the guards on the run. Eventually, when the guards felt that the situation was getting out of hand, a surprise raid on the camp chapel would generally yield several jars of fermenting liquid hidden in the altar.

That the altar would have been used to hide contraband was a general commentary on the initial importance of religion among the German prisoners of war. Neither Protestantism nor Catholicism, the two major religions of Germany, had been of any significance in halting the Nazi movement. Since Nazism became, in essence, Germany's secular religion and since one cannot serve two masters, it was understandable that only a minority of the incoming German POWs admitted to any strong religious convictions. For many of the men, however, two independent forces would bring about a major change. The first concerned the large blocks of unoccupied time which the prisoners now found on their hands. It was, for many, a time for thought and reflection about their lives: about their childhood, their wartime experiences, and their futures. They were, in effect, severed from the Fatherland, and with the loss of one master, it was natural, perhaps, that many would turn to another. The second factor, not one to be underestimated, was the fervor with which American religious organizations approached the POWs. In the words of Chaplain John Dvorovy, of the Provost Marshal General's Office:

Religious work among German prisoners of war has been pioneer work. ... The blessings with which this important work has been crowned is due to the fact that army chaplains have unselfishly given of their time and energy to the task of reclaiming souls for God's kingdom. They have been carrying forward the banner of true religion under the most trying conditions and circumstances. Personal feelings and prejudices had to be set aside. They have been preaching the simple but effective truth of Christ's Gospel as a power of God unto salvationģ.. The effective work of the Chaplains Corps in prisoner of war camps has not only aided thousands of these prisoners to see their own doctrine, but has also turned many of them to the worship of the true Godģ..

Civilian church agencies also combined deep humanitarianism with a war-time crusade to provide the POW's with an alternative to Nazism , and for many of the inmates the alternative was welcomed. Organizations such as the War Relief Services, National Catholic Welfare Council, Lutheran Commision for Prisoners of War, War Prisoners' Aid of the YMCA, World Council of Churches, and the Ecumenical Commission for Chaplaincy Service to Prisoners of War deluged camp chaplains with religious books, pamphlets, and other items necessary to a successful religious program. The American Bible Society, for example, donated tens of thousands of Bibles printed in German to the POWS, and the Federal Council of Churches of Christ in America went so far as to import two prominent Swedish clergymen to work with German prisoners of war in the United States and Canada.

For all the promise of reclaiming the souls of German youth, the American Army chaplains in the POW camps were, in many ways, as regulated as the inmates they were to help. It was not enough for the chaplain to simply be there; he had to converse with the POWs in German or work through a politically reliable prisoner-interpreter. If there were priests or ministers among the Germans, it was the camp chaplain's responsiblility to establish a "working relationship" and to "cultivate his trust and confidence." Every item of religious literature and all reading material, in German or English, had to be cleared first through the camp Intelligence Office as well as the Stockade Office. Among the many instructions for chaplains assigned to POW camps, issued at the Army Chaplain's School, were the following bits of advice:

Conduct religious services. Preach on Gospel texts and avoid political propaganda. No matter how subtle, they will catch on.

And finally, the new chaplains were admonished:

... not to let the assignment to a PW Camp frighten you. Your fears that you might be slugged or decapitated will be found to have been groundless.

However difficult the task, periodic surveys of the prisoners by various church organizations, supported by the growing demand for religious literature, indicated that, indeed, the Germans were responding to the religious program. One six-month survey indicated an increase of a whopping 31 percent in the church attendance of both faiths. Whether any of the inmates were present to keep an eye on the fermenting contraband hidden inside the altar is not known.

Return to U-boat men as POW's