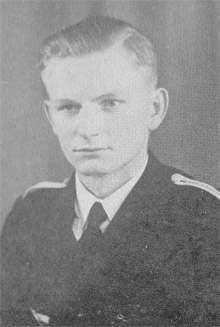 Max-Martin Teichert began his naval career in April 1934. He served on the torpedo boat Iltis and from March 1939 on the destroyer Friedrich Ihn, making 22 patrols on the destroyer in the first months of the war. In June 1940 he transferred to the U-boat force and after six months became I WO on the type VIIC U-boat U-94, on which he served for two patrols.

In September 1941 he commissioned U-456 and then completed ten patrols during 1942 in the Arctic Ocean. On his especially successful fifth patrol he heavily damaged the British cruiser HMS Edinburgh (10,000 tons), which sank some days later.