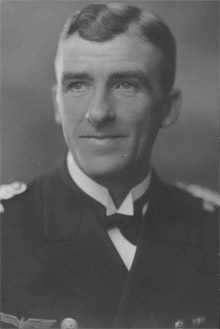 At the end of 1915 SM U 35 was taken over by Kptlt. Lothar von Arnauld de la Periere. He was to become the most successful U-boat skipper of all time, a record which still stands. During his war time career, he sank 194 ships totalling 454,000 tons, always strictly according to prize rules often with his boat's 88 mm deck gun. His patrol performance was outstanding: in April/May 1916 he sank 23 ships, totaling 68,000 tons on a five week patrol and in July/August 1916 in four weeks he sank 54 ships, totaling 91,150 tons using only 4 torpedoes (one miss).

Arnauld, who stayed in command of SM U 35 until 1918 and conducted 15 war patrols with it, later commented on this patrol:

"My record cruise was quite tame and dull. We stopped the vessels. The crews boarded the lifeboats. We inspected the ships' documents, told the crews how they could reach the next port and then sank the stopped prize."

For his achievements the Prussian aristocrat Arnauld, who was a modest but very skilled skipper respected by his crew, was awarded the Pour le Mérite.

After the war Arnauld served in the Turkish Navy in the 1930's and from 1939 again in the German Navy. He died in an aircraft accident at Le Bourget airport near Paris, France in 1941.