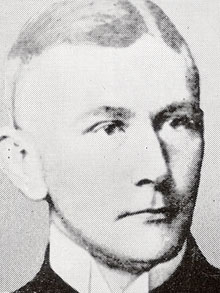 Christian August Max Ahlmann Valentiner was born in Tønder, Denmark just north of the current border with Germany. The area was occupied by Prussia at the time. He was awarded the Pour le Mérite in recognition of of distinguished naval service and leadership. The award also seems to have recognized completion of a war patrol in the Mediterranean where the U38 sank 23 enemy warships and merchant vessels including two neutral ships.

Valentiner was listed after the war as a war criminal by the British authorities because of his very unorthodox methods of attack.

Max Valentiner died on 19 June 1949 in Sønderborg, Denmark and is buried in the cemetery west of the town.