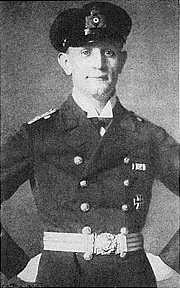 In November 1917 he was promoted to Kptlt. and on 30 March 1918 he was awarded the Pour le Mérite. He became a prisoner of war with a part of his crew on 22 April 1918 after UB 55 hit a mine in the Dover Barrage while running underwater. Between 15 and 20 men escaped from the sinking submarine, but only 8 were found alive by the British trawler Mate. One of the men died on the ship while being transported to Dover.

Wenninger remained in the navy and joined the Luftwaffe on 1 March 1935 as a Oberst, even became General der Flieger on the 1st November 1940. He died in Italy under unknown circumstances on the 13 March 1945.