What happened on
4 April? 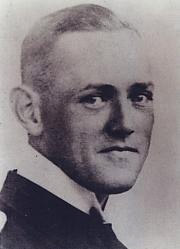 Service during World War Two
Fregattenkapitän Hermann Rigele was one of the oldest U-boat commanders of WWII to depart on patrol when he took his boat UD-3 out from Kiel, Germany on 3 Oct 1942. He was 51 year old at the time. He arrived safely in Lorient, France 20 days later. All in all he would command the UD-3 for 3 operational patrols, 103 days at sea. See his WWII page.