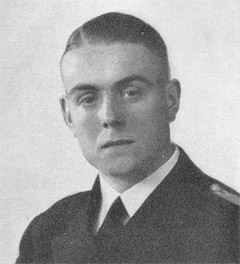 On 28 Apr 1941 southeast of Iceland, in position 60.04N, 15.45W, the British corvette HMS Gladiolus depth charged a German U-boat. This was for some time thought to have sunk U-65, but the target was actually U-96, which escaped unscathed.

The "Das Boot" (The Boat) Connection

Lothar-Günther Buchheim joined U-96 for one patrol as a war correspondent. This resulted in the international best-selling novel of submarine warfare Das Boot (The Boat), the short story Die Eichenlaubfahrt (The Oak-Leaves Patrol) and a three-part text-and-photo chronicle U-bootkrieg (U-Boat War), U-Bootfahrer (U-Boat-Men) and Zu Tode Gesiegt (Victoried to Death).

Buchheim was posted aboard as an official artist to provide impressions of the German Navy in action for propaganda purposes Over 5,000 of his photos survived the war, and 205 of these form the epic photo-essay U-Boat War. All the photographs in U-Boat War were taken by Buchheim with the exception of a few taken by U-96 engineering officer Fritz Grade.

He also wrote the book Jäger im Weltmeer (Hunter in the Ocean) and in 1995 he published the novel Die Festung (The Fortress). There Buchheim writes about the last days in the port of Brest, France and his dramatic schnorchel voyage to La Pallice with the last but one U-boat to leave Brest.

Buchheim’s books are controversial because, particularly in his photo essays, he writes very critically of the U-boat force, and particularly about Dönitz. (Refuting Buchheim, Karl-Friedrich Merten wrote a book entitled Wir U-Bootfahrer sagen: "Nein! So war das nicht!" [We U-boat men say: "No, it wasn't so!"] )

Unlike many other U-boats, which during their service lost men due to accidents and various other causes, U-96 did not suffer any casualties (we know of) until the time of her loss.

There was another U-96 in World War One
That boat was launched from its shipyard on 15 Feb 1917 and commissioned into the Imperial Navy on 11 Apr 1917. The Naval war in WWI was brought to an end with the Armistice signed on 11 Nov, 1918. Read about SM U 96 during WWI.