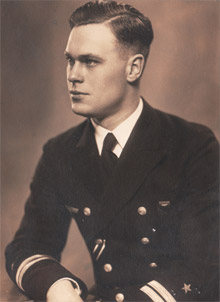 Friedrich Steinfeldt joined the Kriegsmarine in 1940 and after completing his courses he served on the 38th Minesweeping Flotilla from December 1941 to June 1942 when he started his U-boat training. He then served as 2WO (second Watch Officer) on the U-371 (Kptlt. Waldemar Mehl) from November 1942 to February 1943.

In February 1943 Steinfeldt joined the U-195, his future command, as IWO (first Watch Officer) and he served in that role for 6 months before being shipped to U-boat commander school at Neustadt in August. He completed his training in October 1943 and was then given the ex-Italian boat UIT-21 on 14 October 1943. That boat, planned as transport, was never commissioned and on 16 April 1944 Steinfeldt took command of his old boat U-195 at Bordeaux, France.

On 24 August 1944 he took his U-195 to the Indian Ocean on a 119-day-long patrol ending in Batavia (Jakarta), Indonesia. Steinfeldt surrendered his boat to the Japanese at Soerabaja, Indonesia (Niestlé, 1998).

Friedrich Steinfeldt died on on 29 Nov, 1945 at a hospital in Jakarta, Indonesia from dysentery (Wiggins, 1999). 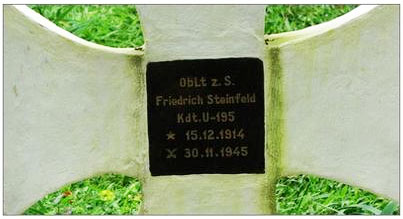 The grave of Friedrich Steinfeldt at the Deutscher Soldatenfriedhof in Arca Domas in Indonesia. The date of death on the headstone does not quite match official records, possibly due to time zone difference (Jakarta being GMT+7).